PL/SQL datatypes are not just limited to writing SQL queries but they are used in the PL/SQL block as well, just like any other programming language.

Provising a datatype specifies how any data will be stored and processed by Oracle when any PL/SQL code block is executed.

Datatype defines the type of data being used, whether it is a number or a word(string) or a single character etc. Following datatypes can be used in PL/SQL depending upon the type of data required: 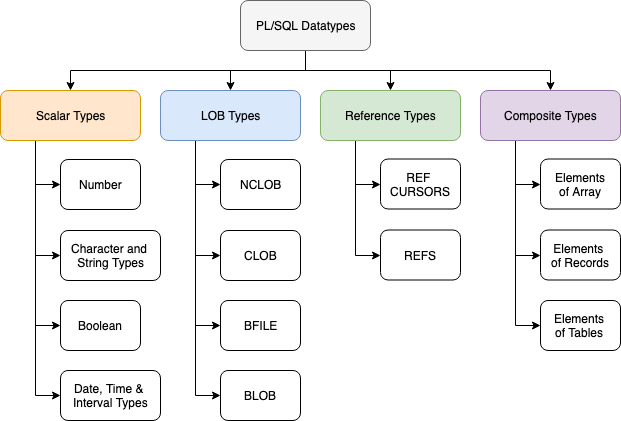 So we have 4 broader categories of datatypes and they are:

We won't be covering all these different datatypes below, but we will be covering the ones which are most widely used.

This datatype is used to store numeric data. Here, p is precision s is scale.

The datatypes covered above are the ones which are most commonly used. But there are many more different datatypes for which you can check the official Oracle reference at the following links:

In this tutorial we covered the datatypes that are used in PL/SQL and while doing so we talked a lot about variables too. If you are confused, move on to the next tutorial where we have covered all about PL/SQL variables.