In this tutorial, we will cover the concept of Demand Paging in the Operating System.

Every process in the virtual memory contains lots of pages and in some cases, it might not be efficient to swap all the pages for the process at once. Because it might be possible that the program may need only a certain page for the application to run. Let us take an example here, suppose there is a 500 MB application and it may need as little as 100MB pages to be swapped, so in this case, there is no need to swap all pages at once.

The demand paging system is somehow similar to the paging system with swapping where processes mainly reside in the main memory(usually in the hard disk). Thus demand paging is the process that solves the above problem only by swapping the pages on Demand. This is also known as lazy swapper( It never swaps the page into the memory unless it is needed).

Swapper that deals with the individual pages of a process are referred to as Pager.

Demand Paging is a technique in which a page is usually brought into the main memory only when it is needed or demanded by the CPU. Initially, only those pages are loaded that are required by the process immediately. Those pages that are never accessed are thus never loaded into the physical memory. 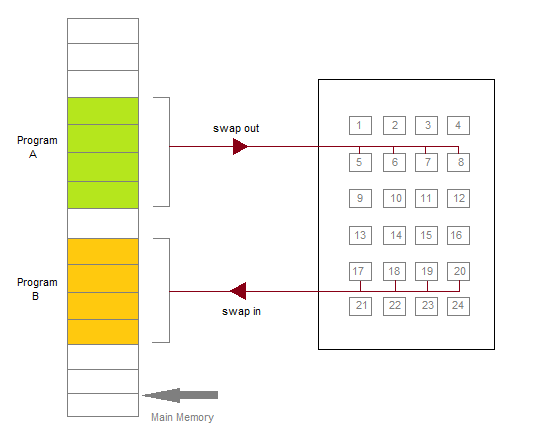 Figure: Transfer of a Paged Memory to the contiguous disk space.

Whenever a page is needed? make a reference to it;

During the translation of address, if the valid-invalid bit in the page table entry is 0 then it leads to page fault. 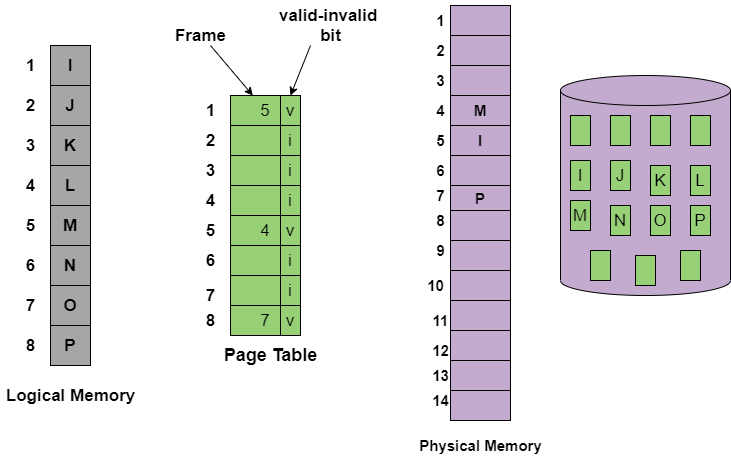 The above figure is to indicates the page table when some pages are not in the main memory.

First of all the components that are involved in the Demand paging process are as follows:

When the process requires any of the pages that are not loaded into the memory, a page fault trap is triggered and the following steps are followed,

The benefits of using the Demand Paging technique are as follows:

Drawbacks of Demand Paging are as follows:

In some cases when initially no pages are loaded into the memory, pages in such cases are only loaded when are demanded by the process by generating page faults. It is then referred to as Pure Demand Paging.