HRRN(Highest Response Ratio Next )Scheduling is a non-preemptive scheduling algorithm in the operating system. It is one of the optimal algorithms used for scheduling.

HRRN is basically the modification of Shortest Job Next(SJN) in order to reduce the problem of starvation.

In the HRRN scheduling algorithm, the CPU is assigned to the next process that has the highest response ratio and not to the process having less burst time.

Now, let us first take a look at how to calculate the Response ratio.

S=It indicates the Service time that is Burst Time.

Now it's time to take a look at an example for the same:

Here, we have several processes with different burst and arraival times, and a Gantt chart to represent CPU allocation time. 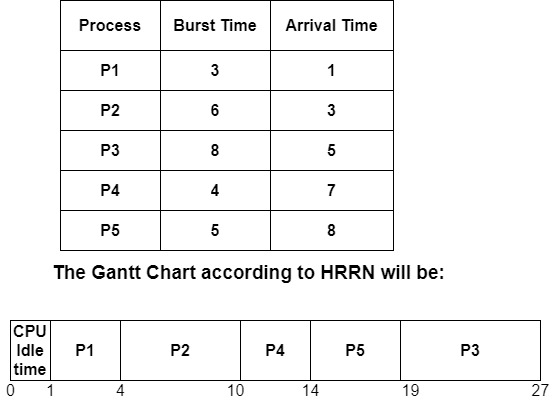 Given below is the explanation of the above example

From the above results, it is clear that Process P4 has the Highest Response ratio, so the Process P4 is schedule after P2.

From the above results,it is clear that Process P5 has the Highest Response ratio, so the Process P5 is schedule after P4

In the table given below, we will calculate turn around time, waiting time, and completion time for all the Processes.

Given below is the C program for HRRN Scheduling:

The advantages of the HRNN scheduling algorithm are as follows:

The disadvantages of the HRNN scheduling algorithm are as follows: