It is very important for you that every computer must have an operating system in order to run other programs. The operating system mainly coordinates the use of the hardware among the various system programs and application programs for various users.

Below we have an abstract view of the components of the computer system: 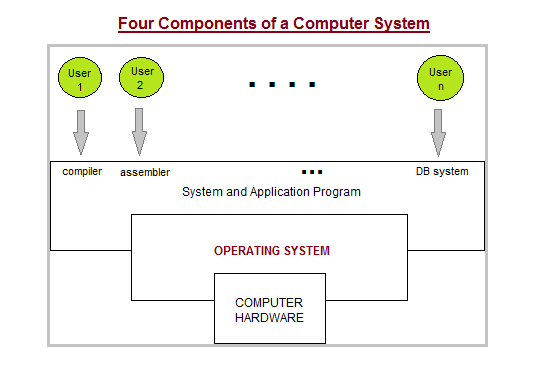 In the above picture:

The user view of the computer refers to the interface being used. Such systems are designed for one user to monopolize its resources, to maximize the work that the user is performing. In these cases, the operating system is designed mostly for ease of use, with some attention paid to performance, and none paid to resource utilization.

The operating system can be viewed as a resource allocator also. A computer system consists of many resources like - hardware and software - that must be managed efficiently. The operating system acts as the manager of the resources, decides between conflicting requests, controls the execution of programs, etc.

Given below are different types of Operating System:

Given below are some advantages of the Operating System:

Disadvantages of an Operating system

Given below are the drawbacks of using an operating system: