In this tutorial, we will be covering the concept of swapping in the Operating system.

Swapping is a memory management technique and is used to temporarily remove the inactive programs from the main memory of the computer system. Any process must be in the memory for its execution, but can be swapped temporarily out of memory to a backing store and then again brought back into the memory to complete its execution. Swapping is done so that other processes get memory for their execution.

Due to the swapping technique performance usually gets affected, but it also helps in running multiple and big processes in parallel. The swapping process is also known as a technique for memory compaction. Basically, low priority processes may be swapped out so that processes with a higher priority may be loaded and executed.

Let us understand this technique with the help of a figure given below: 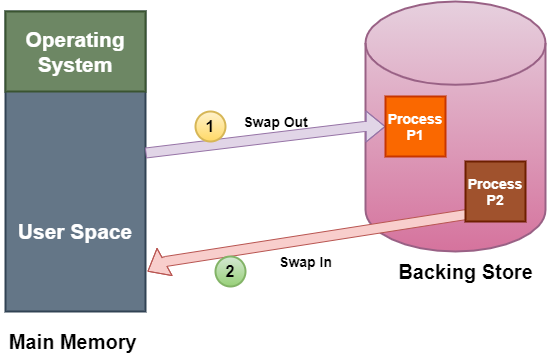 The above diagram shows swapping of two processes where the disk is used as a Backing store.

In the above diagram, suppose there is a multiprogramming environment with a round-robin scheduling algorithm; whenever the time quantum expires then the memory manager starts to swap out those processes that are just finished and swap another process into the memory that has been freed. And in the meantime, the CPU scheduler allocates the time slice to some other processes in the memory.

The swapping of processes by the memory manager is fast enough that some processes will be in memory, ready to execute, when the CPU scheduler wants to reschedule the CPU.

There are two more concepts that come in the swapping technique and these are: swap in and swap out.

Swap In and Swap Out in OS

The procedure by which any process gets removed from the hard disk and placed in the main memory or RAM commonly known as Swap In.

On the other hand, Swap Out is the method of removing a process from the main memory or RAM and then adding it to the Hard Disk.

The advantages/benefits of the Swapping technique are as follows:

The drawbacks of the swapping technique are as follows: