A memory unit is the collection of storage units or devices together. The memory unit stores the binary information in the form of bits. Generally, memory/storage is classified into 2 categories: 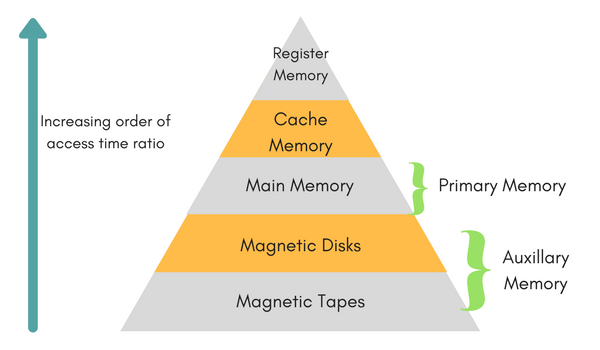 The total memory capacity of a computer can be visualized by hierarchy of components. The memory hierarchy system consists of all storage devices contained in a computer system from the slow Auxiliary Memory to fast Main Memory and to smaller Cache memory.

Auxillary memory access time is generally 1000 times that of the main memory, hence it is at the bottom of the hierarchy.

The main memory occupies the central position because it is equipped to communicate directly with the CPU and with auxiliary memory devices through Input/output processor (I/O).

The cache memory is used to store program data which is currently being executed in the CPU. Approximate access time ratio between cache memory and main memory is about 1 to 7~10

Each memory type, is a collection of numerous memory locations. To access data from any memory, first it must be located and then the data is read from the memory location. Following are the methods to access information from memory locations:

The memory unit that communicates directly within the CPU, Auxillary memory and Cache memory, is called main memory. It is the central storage unit of the computer system. It is a large and fast memory used to store data during computer operations. Main memory is made up of RAM and ROM, with RAM integrated circuit chips holing the major share.

It is not directly accessible to the CPU, and is accessed using the Input/Output channels.

The data or contents of the main memory that are used again and again by CPU, are stored in the cache memory so that we can easily access that data in shorter time.

Whenever the CPU needs to access memory, it first checks the cache memory. If the data is not found in cache memory then the CPU moves onto the main memory. It also transfers block of recent data into the cache and keeps on deleting the old data in cache to accomodate the new one.

The performance of cache memory is measured in terms of a quantity called hit ratio. When the CPU refers to memory and finds the word in cache it is said to produce a hit. If the word is not found in cache, it is in main memory then it counts as a miss.

The ratio of the number of hits to the total CPU references to memory is called hit ratio.

It is also known as content addressable memory (CAM). It is a memory chip in which each bit position can be compared. In this the content is compared in each bit cell which allows very fast table lookup. Since the entire chip can be compared, contents are randomly stored without considering addressing scheme. These chips have less storage capacity than regular memory chips.