Following are some of the most widely used types of Operating system.

If you dont know what Operating system is, you can learn from here. 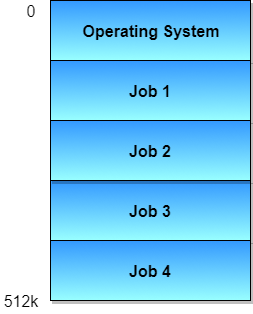 Microcomputers were immediately able to adopt some of the technology developed for larger operating systems. On the other hand, the hardware costs for microcomputers are sufficiently low that individuals have sole use of the computer, and CPU utilization is no longer a prime concern. Thus, some of the design decisions made in operating systems for mainframes may not be appropriate for smaller systems.

The motivation behind developing distributed operating systems is the availability of powerful and inexpensive microprocessors and advances in communication technology.

These advancements in technology have made it possible to design and develop distributed systems comprising of many computers that are inter connected by communication networks. The main benefit of distributed systems is its low price/performance ratio.

Following are the two types of distributed operating systems used:

Centralized systems today act as server systems to satisfy requests generated by client systems. The general structure of a client-server system is depicted in the figure below:

Server Systems can be broadly categorized as: Compute Servers and File Servers.

The growth of computer networks - especially the Internet and World Wide Web (WWW) – has had a profound influence on the recent development of operating systems. When PCs were introduced in the 1970s, they were designed for personal use and were generally considered standalone computers. With the beginning of widespread public use of the Internet in the 1990s for electronic mail and FTP, many PCs became connected to computer networks.


In contrast to the Tightly Coupled systems, the computer networks used in these applications consist of a collection of processors that do not share memory or a clock. Instead, each processor has its own local memory. The processors communicate with one another through various communication lines, such as high-speed buses or telephone lines. These systems are usually referred to as loosely coupled systems ( or distributed systems). The general structure of a client-server system is depicted in the figure below:

Clustered technology is rapidly changing. Clustered system's usage and it's features should expand greatly as Storage Area Networks(SANs). SANs allow easy attachment of multiple hosts to multiple storage units. Current clusters are usually limited to two or four hosts due to the complexity of connecting the hosts to shared storage.

It is defined as an operating system known to give maximum time for each of the critical operations that it performs, like OS calls and interrupt handling.

While the real-time operating systems that can only guarantee a maximum of the time, i.e. the critical task will get priority over other tasks, but no assurity of completeing it in a defined time. These systems are referred to as Soft Real-Time Operating Systems.

Handheld systems include Personal Digital Assistants(PDAs), such as Palm-Pilots or Cellular Telephones with connectivity to a network such as the Internet. They are usually of limited size due to which most handheld devices have a small amount of memory, include slow processors, and feature small display screens.

Some handheld devices may use wireless technology such as BlueTooth, allowing remote access to e-mail and web browsing. Cellular telephones with connectivity to the Internet fall into this category. Their use continues to expand as network connections become more available and other options such as cameras and MP3 players, expand their utility.