Another class of scheduling algorithms has been created for situations in which processes are easily classified into different groups.

A multi-level queue scheduling algorithm partitions the ready queue into several separate queues. The processes are permanently assigned to one queue, generally based on some property of the process, such as memory size, process priority, or process type. Each queue has its own scheduling algorithm.

In addition, there must be scheduling among the queues, which is commonly implemented as fixed-priority preemptive scheduling. For example, The foreground queue may have absolute priority over the background queue.

Let us consider an example of a multilevel queue-scheduling algorithm with five queues: 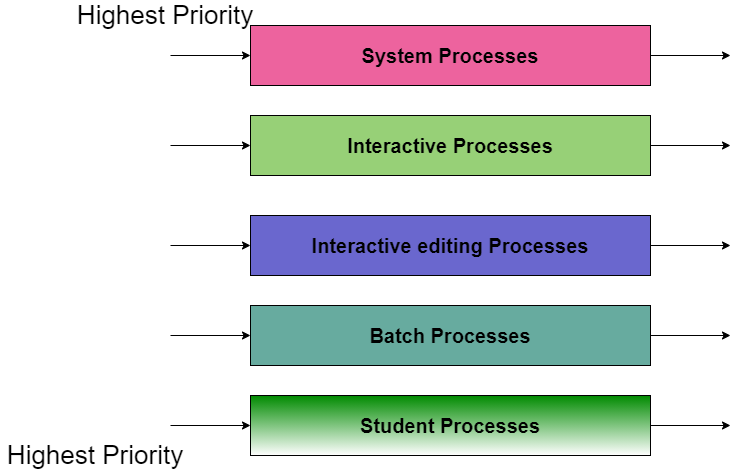 The Description of the processes in the above diagram is as follows:

In an operating system, there are many processes, in order to obtain the result we cannot put all processes in a queue; thus this process is solved by Multilevel queue scheduling.

Given below is the C implementation of Multilevel Queue Scheduling:

The output of the above code is as follows:

With the help of this scheduling we can apply various kind of scheduling for different kind of processes:

For Batch Processes: Round Robin(RR) Scheduling

The main disadvantage of Multilevel Queue Scheduling is the problem of starvation for lower-level processes.

Let us understand what is starvation?