What is Process Scheduling?

The act of determining which process is in the ready state, and should be moved to the running state is known as Process Scheduling.

The prime aim of the process scheduling system is to keep the CPU busy all the time and to deliver minimum response time for all programs. For achieving this, the scheduler must apply appropriate rules for swapping processes IN and OUT of CPU.

Scheduling fell into one of the two general categories:

What are Scheduling Queues?

A new process is initially put in the Ready queue. It waits in the ready queue until it is selected for execution(or dispatched). Once the process is assigned to the CPU and is executing, one of the following several events can occur: 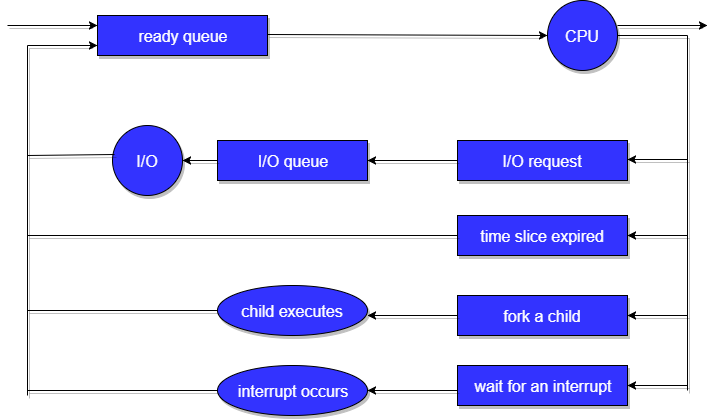 In the first two cases, the process eventually switches from the waiting state to the ready state, and is then put back in the ready queue. A process continues this cycle until it terminates, at which time it is removed from all queues and has its PCB and resources deallocated.

There are three types of schedulers available:

Let's discuss about all the different types of Schedulers in detail:

Long term scheduler runs less frequently. Long Term Schedulers decide which program must get into the job queue. From the job queue, the Job Processor, selects processes and loads them into the memory for execution. Primary aim of the Job Scheduler is to maintain a good degree of Multiprogramming. An optimal degree of Multiprogramming means the average rate of process creation is equal to the average departure rate of processes from the execution memory.

This is also known as CPU Scheduler and runs very frequently. The primary aim of this scheduler is to enhance CPU performance and increase process execution rate.

This scheduler removes the processes from memory (and from active contention for the CPU), and thus reduces the degree of multiprogramming. At some later time, the process can be reintroduced into memory and its execution van be continued where it left off. This scheme is called swapping. The process is swapped out, and is later swapped in, by the medium term scheduler.

Swapping may be necessary to improve the process mix, or because a change in memory requirements has overcommitted available memory, requiring memory to be freed up. This complete process is descripted in the below diagram:

Addition of Medium-term scheduling to the queueing diagram.

What is Context Switch?

Below we have discussed the two major operation Process Creation and Process Termination.

On a typical UNIX systems the process scheduler is termed as sched, and is given PID 0. The first thing done by it at system start-up time is to launch init, which gives that process PID 1. Further Init launches all the system daemons and user logins, and becomes the ultimate parent of all other processes.

A child process may receive some amount of shared resources with its parent depending on system implementation. To prevent runaway children from consuming all of a certain system resource, child processes may or may not be limited to a subset of the resources originally allocated to the parent.

There are two options for the parent process after creating the child :

There are also two possibilities in terms of the address space of the new process:

To illustrate these different implementations, let us consider the UNIX operating system. In UNIX, each process is identified by its process identifier, which is a unique integer. A new process is created by the fork system call. The new process consists of a copy of the address space of the original process. This mechanism allows the parent process to communicate easily with its child process. Both processes (the parent and the child) continue execution at the instruction after the fork system call, with one difference: The return code for the fork system call is zero for the new(child) process, whereas the(non zero) process identifier of the child is returned to the parent.

Below is a C program to illustrate forking a separate process using UNIX(made using Ubuntu):

GATE Numerical Tip: If fork is called for n times, the number of child processes or new processes created will be: 2n – 1.

By making the exit(system call), typically returning an int, processes may request their own termination. This int is passed along to the parent if it is doing a wait(), and is typically zero on successful completion and some non-zero code in the event of any problem.

Processes may also be terminated by the system for a variety of reasons, including :

When a process ends, all of its system resources are freed up, open files flushed and closed, etc. The process termination status and execution times are returned to the parent if the parent is waiting for the child to terminate, or eventually returned to init if the process already became an orphan.

The processes which are trying to terminate but cannot do so because their parent is not waiting for them are termed zombies. These are eventually inherited by init as orphans and killed off.