In this tutorial, we will be covering the HDLC protocol in the data link layer of the OSI Model.

HDLC (High-Level Data Link Control) is a bit-oriented protocol that is used for communication over the point-to-point and multipoint links. This protocol implements the mechanism of ARQ(Automatic Repeat Request). With the help of the HDLC protocol,full-duplex communication is possible.

HDLC is the most widely used protocol and offers reliability, efficiency, and a high level of Flexibility.

In order to make the HDLC protocol applicable for various network configurations, there are three types of stations and these are as follows:

The HDLC protocol offers two modes of transfer that mainly can be used in different configurations. These are as follows:

Let us now discuss both these modes one by one:

This mode is used for both point-to-point as well as multiple-point links.

In order to provide the flexibility that is necessary to support all the options possible in the modes and Configurations that are just described above. There are three types of frames defined in the HDLC:

Each type of frame mainly serves as an envelope for the transmission of a different type of message.

There are up to six fields in each HDLC frame. There is a beginning flag field, the address field then, a control field, an information field, a frame check sequence field(FCS), and an ending field.

Let us take a look at different HDLC frames: 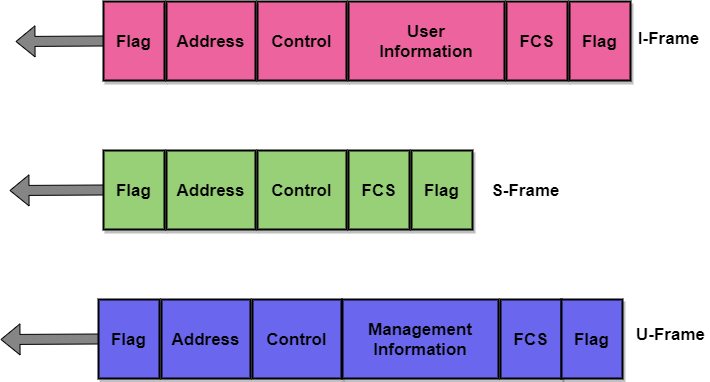 Now its time to discuss the fields and the use of fields in different frame types:

This field of the HDLC frame is mainly a sequence of 8-bit having the bit pattern 01111110 and it is used to identify the beginning and end of the frame. The flag field mainly serves as a synchronization pattern for the receiver.

This is the third field of the HDLC frame and it is a 1 or 2-byte segment of the frame and is mainly used for flow control and error control. Bits interpretation in this field mainly depends upon the type of the frame.

This field of the HDLC frame contains the user's data from the network layer or the management information. The length of this field varies from one network to another.

Given below are some of the features of the HDLC protocol:

1.This protocol uses bits to stuff flags occurring in the data.

2.This protocol is used for point-to-point as well as multipoint link access.

3.HDLC is one of the most common protocols of the data link layer.

4.HDLC is a bit-oriented protocol.

5.This protocol implements error control as well as flow control.