In this tutorial, we will be covering the concept of Gigabit ethernet in detail in Computer Networks.

Ethernet is basically a physical and data link layer technology for Local Area Network(LAN). Gigabit Ethernet was developed in June 1998.

The design of the Gigabit Ethernet can be summarized with the help of the following given points:

1.It is compatible with standard or fast ethernet.

2.It provides the data rate of 1 Gbps.

4.Provides the support of auto-negotiation.

5.It keeps the same minimum and maximum lengths of frames.

With the evolution of the Ethernet, the main concern was to keep the MAC layer untouched. But in order to achieve the data rate of 1Gbps, it was not possible.

There are two different approaches in Gigabit Ethernet in order to access the Medium:

All the implementations of the Gigabit Ethernet follow the Full-Duplex Approach.

In this approach, there is a central switch that is connected to all the computers or other with other switches. Each switch has buffers for each input port where the data gets stored until the transmission.

In this CSMA/CD is not used as there occurs no collision. As there is a lack of collision thus it implies that the maximum length of the cable is determined with the signal attenuation in the cable.

It is another approach used by gigabit ethernet. In this approach the switch is usually replaced by the hub, which mainly acts as the common cable; thus there are chances of the collision to occur. This approach makes use of CSMA/CD.

The maximum length in this approach mainly depends upon the minimum frame size.

The reduction in the time slot means that collision is detected 100 times earlier.

Thus the maximum length of the network is 25 m. It may be suitable in the case if all the stations are in a single room, but it may not even be long enough so as to connect the computers in one single office.

This approach basically forces a station to add extension bits (i.e padding) to any frame whose size is less than 4096 bits.

The above approach i.e, Carrier Extension was not efficient in the case if we have if there is a series of short frames to send. Each frame series also carries redundant data. In order to improve the efficiency, this approach was proposed.

Instead of adding an extension to each frame, with the help of this approach, multiple frames are sent.

In Gigabit Ethernet the physical layer is more complicated.

The Gigabit Ethernet is mainly designed in order to connect two or more stations. In case if there are only two stations then they can be connected point-to-point.In the case of three or more stations,we can use start topology by making the use of either hub or switch at the center.

There is another possible configuration where several star topologies can be connected. 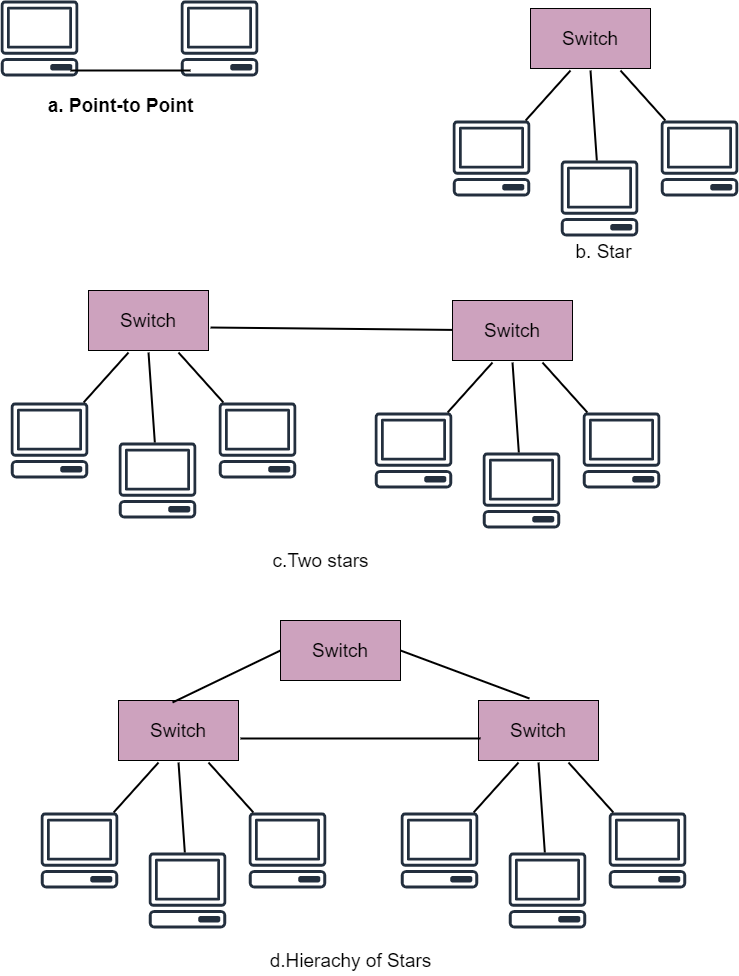 The categorization of Gigabit Ethernet can be done by using either a two-wire or four-wire implementation.

Given below are some of the benefits of using Gigabit Ethernet: