In this tutorial, we will be covering the concept of Carrier Sense Multiple Access that lies under the category of Random Access methods in detail in the data link layer.

In order to minimize the chances of collision and in return to increase the performance, the method name CSMA was developed.

On the shared medium, whenever any channel has a data frame to transmit, then the station attempts to detect the presence of any carrier signal from the other stations that are connected to the shared medium.

The propagation time is referred to as vulnerable time in the CSMA and it is denoted as Tp. This is basically the time a signal needed by a signal in order to propagate from one end of the medium to another end.

When a station sends a frame and at the same time if any other station tries to send a frame then it will result in the collision.

In a case, if the first bit of the frame reaches the end of the medium then every station hears that bit and refrains from sending.

There are different versions of Access modes in CSMA and these are as follows:

This is one of the simplest and straightforward methods. In this method, once the station finds that the medium is idle then it immediately sends the frame. By using this method there are higher chances for collision because it is possible that two or more stations find the shared medium idle at the same time and then they send their frames immediately. 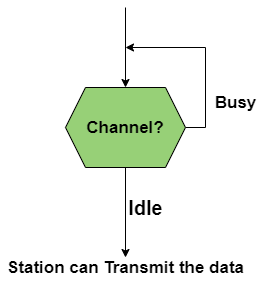 The given below figure shows the behavior of a 1-persistent approach:

With the help of the Nonpersistent CSMA approach, the chances of collision get reduced because it is unlikely to happen that two or more stations wait for the same amount of time and then retry to send simultaneously.

But due to this approach, the efficiency of the network gets reduced because the medium stays idle when there may be stations having frames to send. 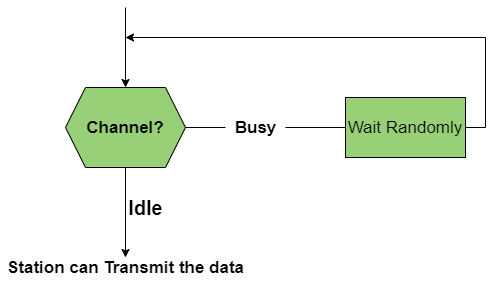 The given below figure shows the behavior of a Nonpersistent approach:

This method is used in the case if the channel has time slots with a slot duration that is equal to or greater than the maximum propagation time. The p-persistent approach mainly combines the advantages of 1-persistent and Nonpersistent CSMA.

By using the p-persistent approach the chances of collision get reduced and there is increased efficiency.

Using this approach, if the station finds the line idle then it follows the given below steps: 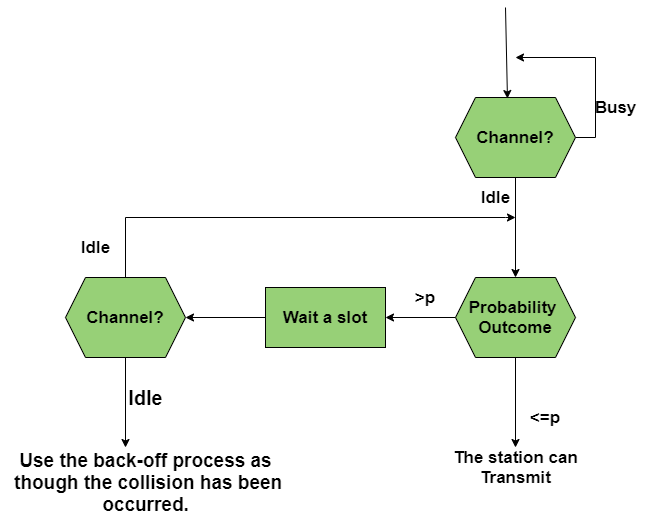 The given below figure shows the behavior of a p-Persistent approach:

There are two variations of CSMA methods: