In this tutorial, we will be covering the concepts of SMTP in the Application layer of the OSI Model. 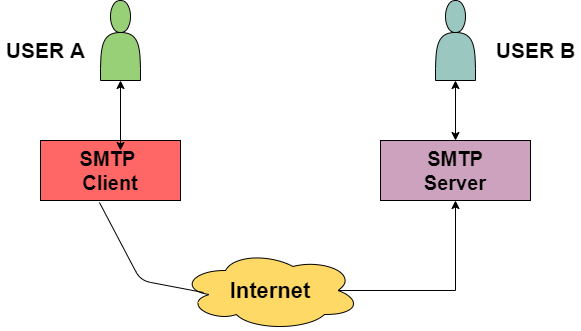 SMTP is used two times while sending an Email:

It is important to note that in order to receive or download the email,

All the users make use of User Agent (UA). The Mail Transfer Agent (MTA) mainly helps to exchange all the messages in between both sender and receiver using the TCP/IP. The system administrator has the authority to configure the set up of local MTA, thus the users who are sending the email do not need to deal with the MTA.

The MTA keeps the queue in the pool of messages, if the receiver is not available at that moment then MTA can schedule the repeat delivery of all the messages.

MTA (Mail User Agent) forwards the emails into mailboxes of the user's local system, and then the user agent (UA) can download those messages at any time. 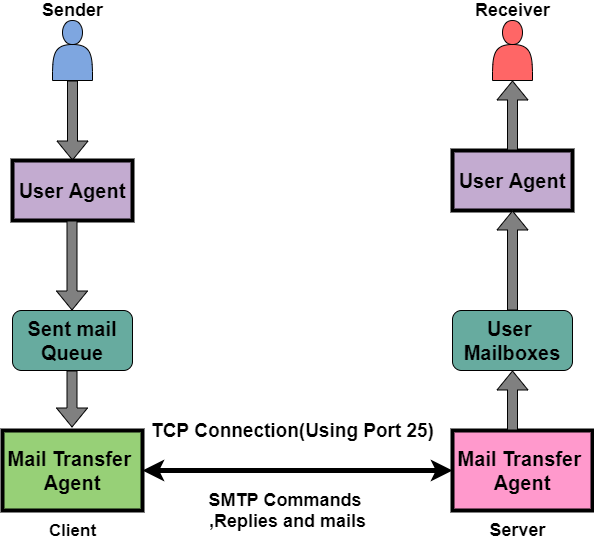 The SMTP Client as well as the SMTP server both has two main components and these are:

Let us now take a look at communication between the sender and the receiver:

An email is sent between the sender and receiver using a series of request and response messages. An Email mainly consists of two parts a header and body. The body part of an email indicates the main message area. It is the actual information that is to be read by the receiver. The header mainly contains the address of the sender and recipient and it also contains the subject of the email.

In order to terminate the header of the email, there is a NULL line, everything after the NULL line is considered as the body of the message.

Mailboxes are checked by the user agent at the server side at a particular interval of time. In case if any information is received then it informs the receiver about the email.

At the time when the user tries to read the email then MTA mainly displays a list of emails with their short description in the mailbox. If the user selects any of the emails then can easily view the contents inside the email.

On the other hand, the SMTP server will keep the mail to itself until it is successfully copied to the SMTP at the receiver. The server SMTP mainly responds to the session request.

Thus the session is started by the client-SMTP and the server-SMTP will respond to the request of the sender.

Let us take a look at the characteristics of the SMTP:

Let us take a look at the advantages offered by the simple mail transfer protocol(SMTP):