In this tutorial, we will be covering the concept of Flow and Error Control in the Data Link layer.

Flow Control mainly coordinates with the amount of data that can be sent before receiving an acknowledgment from the receiver and it is one of the major duties of the data link layer.

Thus the flow control makes the sender; wait for the acknowledgment from the receiver before the continuation to send more data to the receiver.

Some of the common flow control techniques are: Stop-and-Wait and sliding window technique.

Error Control contains both error detection and error correction. It mainly allows the receiver to inform the sender about any damaged or lost frames during the transmission and then it coordinates with the retransmission of those frames by the sender.

The term Error control in the data link layer mainly refers to the methods of error detection and retransmission. Error control is mainly implemented in a simple way and that is whenever there is an error detected during the exchange, then specified frames are retransmitted and this process is also referred to as Automatic Repeat request(ARQ).

The implementation of protocols is mainly implemented in the software by using one of the common programming languages. The classification of the protocols can be mainly done on the basis of where they are being used. 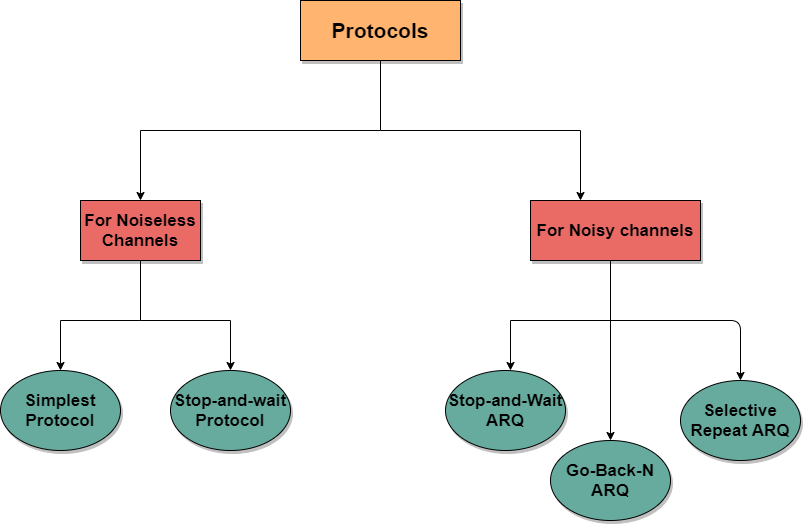 All the above-given protocols are unidirectional in the sense that the data frames travel from one node i.e Sender to the other node i.e receiver.

But in the real-life network, the protocols of the data link layer are implemented as bidirectional which means the flow of the data is in both directions. And in these protocols, the flow control and error control information such as ACKs and NAKs are included in the data frames in a technique that is commonly known as piggybacking.

In our further tutorials we will be covering the above mentioned protocols in detail.