In this tutorial, we will cover the components of Computer Networks.

A Computer Network basically comprises multiple computers that are interconnected to each other in order to share information and other resources. Multiple computers are connected either with the help of cables or wireless media.

So basically with the help of a computer network two or more devices are connected in order to share a nearly limitless range of information and services which includes;

Let us now learn the main components of Computer Networks;

For example: In order to establish a wireless network there is no need for cables.

Given below is a list of components of a Computer Network: 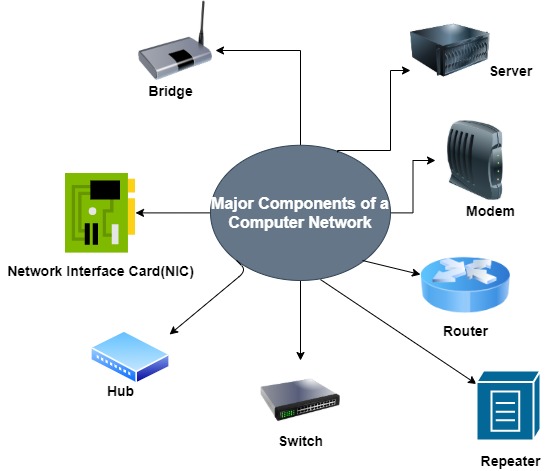 We are now going to discuss all the above mentioned major components of a Computer Network:

NIC mainly provide the physical interface between computer and cabling.NIC prepares data, sends the data, and controls the flow of data. It can also receive and translate the data into bytes for the CPU to understand.

Factors to be taken into consideration when choosing a NIC:

Hubs are those devices that are used to link several computers together. Hubs repeat one signal that comes in on one port and then copies it to other ports.

Active Hubs make use of electronics in order to amplify and clean up the signals before they are broadcast to other ports. Active Hubs are mainly used to extend the maximum distance between nodes. It works both as a wiring center as well as a repeater.

Intelligent hub sustains the network along with the selection path. The tasks of both passive and active are manageable by the intelligent hub.

With the help of an Intelligent hub, the Speed and efficiency of the whole network increases which helps to gain the fast and efficient performance of the network.

Switch mainly resembles a Hub. It is a layer-2 device and it is used for the intelligent forwarding of messages. By intelligent we mean the decision-making ability of the switch. As hub works in the way by sending data to all ports on the device, whereas the switch sends the data to only that port that is connected with the destination device.

Switches are categorized into 4:

1. Managed Switch
These are expensive switches and are mainly used in those organizations that have large and complex networks. Managed switches are configured using the Simple Network Management Protocol(SNMP). These switches provide a high level of security, complete management of the network thus beside their expensiveness these are used in large organizations because they provide high scalability and flexibility

3. PoE Switch
These are referred to as Power over Ethernet switches. With the help of the PoE technology, these switches combine the data and power transmission over the same cable, and with the help of that devices connected to this switch are able to receive both electricity as well as data over the same line. Thus PoE switches offer more flexibility.

4. LAN Switch
LAN switch is referred to as Local Area Network switch and it is mainly used to connect devices in the internal local area network of an organization. These are helpful in reducing network congestion. Bandwidth with these switches is allocated in a manner such that there is no overlapping of data packets in the network.

They are incorporated into the networks in order to extend the coverage area. Repeaters can connect signals by making the use of diffrent types of cables.

Types of repeaters that are available are as follows:

1. Analog Repeaters
These are only used to amplify the analog signals.

2. Digital Repeaters
These are only used to amplify digital signals.

4. Wireless Repeaters
These are mainly used in wireless local area networks and also in cellular networks.

5. Local Repeaters
These are used to connect segments of a local area network that are separated by a small distance.

6. Remote Repeaters
These are mainly used to connect those local area networks that are far away from each other.

The router is a network component that is mainly used to send or receive data on the computer network. The process of forwarding data packets from the source to the destination is referred to as Routing.

Different types of routers are as follows:

2.Edge Routers
An edge router is also known as a Gateway router or gateway simply. The gateway is the network's outermost point of connection with external networks and also includes the Internet. These routers are mainly used to optimize bandwidth and are designed in order to connect to other routers so as to distribute data to end-users. Border Gateway protocol is mainly used for connectivity by edge routers.

These are further categorized into two:

3. Brouters
Brouter means bridging routing device. These are special routers and they also provide functionalities of bridges. They perform the functioning of the bridge as well as of router; like a bridge, these routers help to transfer data between networks, and like the router, they route the data within the devices of a network.

5.Distribution Routers
These routers mainly receive the data from the edge router (or gateway) via a wired connection and then sends it on to the end-users with the help of Wi-Fi.

One of the most important functions of the modem is to convert analog signals into digital signals and vice versa. Also, this device is a combination of two devices: modulator and demodulator. The modulator mainly converts the digital data into analog data at the time when the data is being sent by the computer.

The demodulator basically converts the analog data signals into digital data at the time when it is being received by the computer.

Thus servers are mainly used to serve the requests of other devices. It can be hardware or software.

It is another important component of the computer network. The bridge is also a layer-2( that is data link layer device). A bridge is mainly used to connect two or more local area networks together. These are mainly used as they help in the fast transferring of the data.

Thus Bridge can mainly transfer the data between different protocols (i.e. a Token Ring and Ethernet network) and operates at the data link layer or level 2 of the OSI (Open Systems Interconnection) networking reference model as told above.

Bridges are further divided into two: