Guided media, which are those that provide a conduit from one device to another, include Twisted-Pair Cable, Coaxial Cable, and Fibre-Optic Cable.

This cable is the most commonly used and is cheaper than others. It is lightweight, cheap, can be installed easily, and they support many different types of network. Some important points :

A twisted pair consists of two conductors(normally copper), each with its own plastic insulation, twisted together. One of these wires is used to carry signals to the receiver, and the other is used only as ground reference. The receiver uses the difference between the two. In addition to the signal sent by the sender on one of the wires, interference(noise) and crosstalk may affect both wires and create unwanted signals. If the two wires are parallel, the effect of these unwanted signals is not the same in both wires because they are at different locations relative to the noise or crosstalk sources. This results in a difference at the receiver.

Twisted Pair is of two types:

It is the most common type of telecommunication when compared with Shielded Twisted Pair Cable which consists of two conductors usually copper, each with its own colour plastic insulator. Identification is the reason behind coloured plastic insulation.

UTP cables consist of 2 or 4 pairs of twisted cable. Cable with 2 pair use RJ-11 connector and 4 pair cable use RJ-45 connector.

It consists of two insulating copper wires (1mm thick). The wires are twisted together in a helical form to reduce electrical interference from similar pair.

This cable has a metal foil or braided-mesh covering which encases each pair of insulated conductors. Electromagnetic noise penetration is prevented by metal casing. Shielding also eliminates crosstalk (explained in KEY TERMS Chapter).

One way to measure the performance of twisted-pair cable is to compare attenuation versus frequency and distance. As shown in the below figure, a twisted-pair cable can pass a wide range of frequencies. However, with increasing frequency, the attenuation, measured in decibels per kilometre (dB/km), sharply increases with frequencies above 100kHz. Note that gauge is a measure of the thickness of the wire. 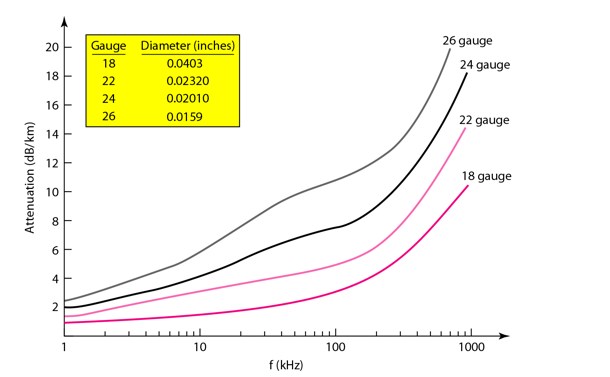 Coaxial is called by this name because it contains two conductors that are parallel to each other. Copper is used in this as centre conductor which can be a solid wire or a standard one. It is surrounded by PVC installation, a sheath which is encased in an outer conductor of metal foil, barid or both.

Outer metallic wrapping is used as a shield against noise and as the second conductor which completes the circuit. The outer conductor is also encased in an insulating sheath. The outermost part is the plastic cover which protects the whole cable.

Here the most common coaxial standards.

Coaxial cables are categorized by their Radio Government(RG) ratings. Each RG number denotes a unique set of physical specifications, including the wire gauge of the inner conductor, the thickness and the type of the inner insulator, the construction of the shield, and the size and type of the outer casing. Each cable defined by an RG rating is adapted for a specialized function, as shown in the table below:

To connect coaxial cable to devices, we need coaxial connectors. The most common type of connector used today is the Bayonet Neill-Concelman (BNC) connector. The below figure shows 3 popular types of these connectors: the BNC Connector, the BNC T connector and the BNC terminator.

There are two types of Coaxial cables:

This is a 50 ohm (Ω) coaxial cable which is used for digital transmission. It is mostly used for LAN's. Baseband transmits a single signal at a time with very high speed. The major drawback is that it needs amplification after every 1000 feet.

We can measure the performance of a coaxial cable in same way as that of Twisted Pair Cables. From the below figure, it can be seen that the attenuation is much higher in coaxial cable than in twisted-pair cable. In other words, although coaxial cable has a much higher bandwidth, the signal weakens rapidly and requires the frequent use of repeaters. 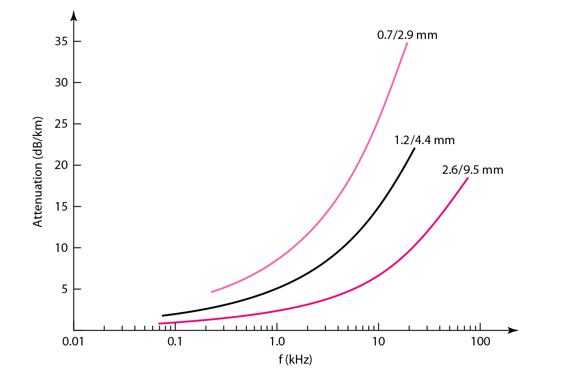 A fibre-optic cable is made of glass or plastic and transmits signals in the form of light.

For better understanding we first need to explore several aspects of the nature of light.

Light travels in a straight line as long as it is mobbing through a single uniform substance. If ray of light travelling through one substance suddenly enters another substance (of a different density), the ray changes direction.

The below figure shows how a ray of light changes direction when going from a more dense to a less dense substance.

Bending of a light ray

As the figure shows:

Note: The critical angle is a property of the substance, and its value differs from one substance to another.

Optical fibres use reflection to guide light through a channel. A glass or plastic core is surrounded by a cladding of less dense glass or plastic. The difference in density of the two materials must be such that a beam of light moving through the core is reflected off the cladding instead of being refracted into it.

Internal view of an Optical fibre 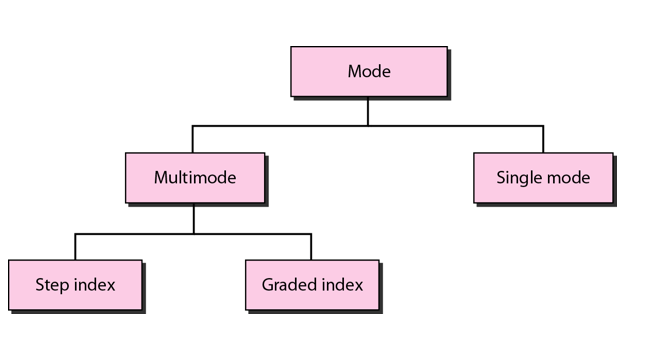 Multimode is so named because multiple beams from a light source move through the core in different paths. How these beams move within the cable depends on the structure of the core as shown in the below figure. 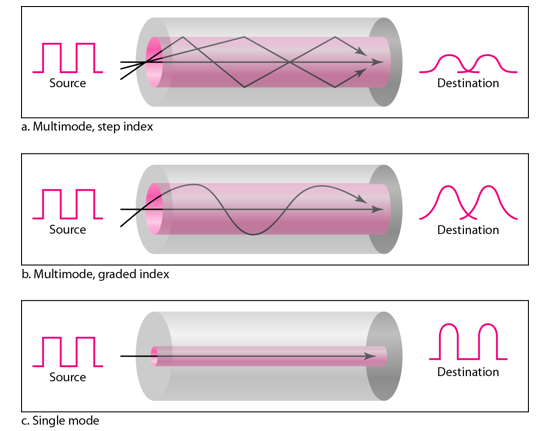 Single mode uses step-index fibre and a highly focused source of light that limits beams to a small range of angles, all close to the horizontal. The single-mode fibre itself is manufactured with a much smaller diameter than that of multimode fibre, and with substantially lower density.
The decrease in density results in a critical angle that is close enough to 90 degree to make the propagation of beams almost horizontal.

Optical fibres are defined by the ratio of the diameter or their core to the diameter of their cladding, both expressed in micrometers. The common sizes are shown in the figure below:

There are three types of connectors for fibre-optic cables, as shown in the figure below.

There are some disadvantages in the use of optical fibre:

Attenuation is flatter than in the case of twisted-pair cable and coaxial cable. The performance is such that we need fewer(actually one tenth as many) repeaters when we use the fibre-optic cable.