In this tutorial, we will be covering another protocol used in the Noiseless channels in the Data link layer.

Stop-and-wait Protocol is used in the data link layer for the transmission in the noiseless channels. Let us first understand why there is a need to use this protocol then we will cover this protocol in detail.

We have studied the simplest protocol in the previous tutorial, suppose there is a scenario in which the data frames arrive at the receiver's site faster than they can be processed means the rate of transmission is more than the processing rate of the frames. Also, it is normal that the receiver does not have enough space, and the data is also coming from multiple sources. Then due to all these, there may occur discarding of frames or denial of service.

In order to prevent the receiver from overwhelming, there is a need to tell the sender to slow down the transmission of frames. We can make use of feedback from the receiver to the sender.

Now from the next section, we will cover the concept of the Stop-and-wait protocol.

Design of the Stop-and-Wait protocol

Datalink layer at the sender side waits for its network layer in order to send the data packet. After that data link checks that it can send the frame or not. In case of receiving a positive notification from the physical layer; the data link layer makes the frame out of the data provided by the network layer and then sends it to the physical layer. After sending the data it will then wait for the acknowledgment before sending the next frame.

The data link layer on the receiver side waits for the frame to arrive. When the frame arrives then the receiver processes the frame and then delivers it to the network layer. After that, it will send the acknowledgment or we can say that ACK frame back to the sender. 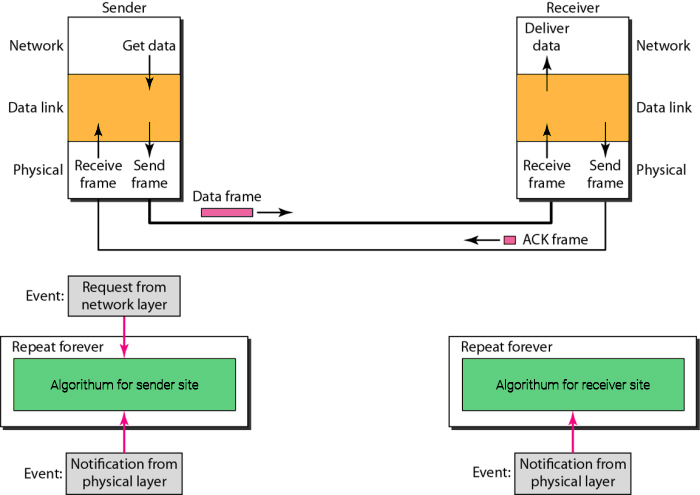 This is an algorithm used at the sender site for the stop-and-wait protocol. Applications can have its implementation in its own programming lamguage.

Algorithm At the Receiver Side

This is an algorithm used at the receiver side for the stop-and-wait protocol. Applications can have their implementation in their own programming language.

Flow diagram of the stop-and-wait protocol

Given below is the flow diagram of the stop-and-wait protocol: 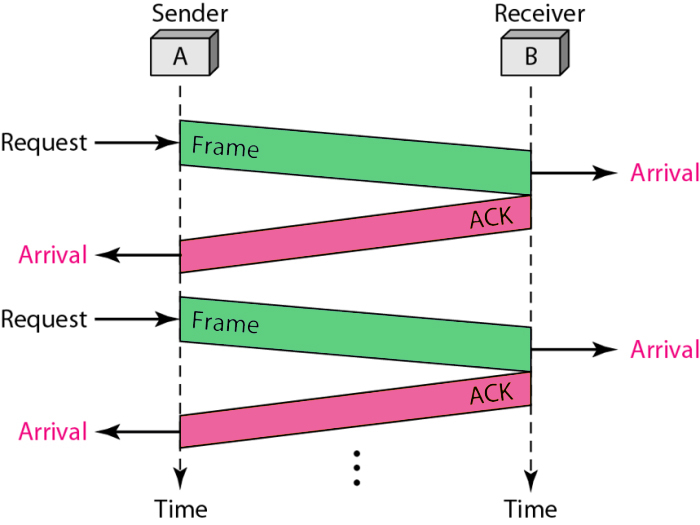 One of the main advantages of the stop-and-wait protocol is the accuracy provided. As the transmission of the next frame is only done after receiving the acknowledgment of the previous frame. Thus there is no chance for data loss.

Given below are some of the drawbacks of using the stop-and-wait Protocol: