In this tutorial, we will be covering the transport layer protocol i.e, UDP in Computer Networks.

The UDP packets are commonly known as User Datagram and the size of the header is fixed that is 8 bytes.

Let us now take a look at the format of User Datagram; 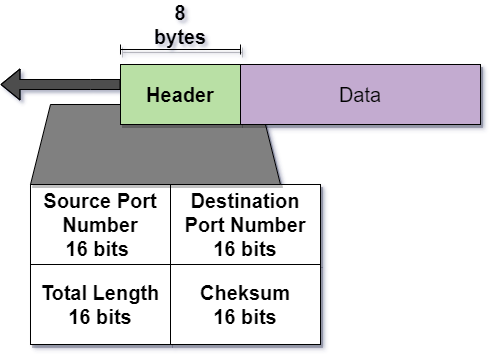 In case if the source host is a client (that mainly sends a request), then in most cases the ephemeral port number is requested by the process and also chosen by UDP software that runs on the source host.

But in the case of the server as a source host(mainly a server sending a response) then the port number is a well-known port number in such cases.

This port number is mainly used by the process that is running on the destination host. Its length is 16 bits.

If the destination host is the server ( a client sending the request), then the port number is a well-known port number.

In case if the destination host is a client( server sending the response), then in most cases the port number is an ephemeral port number.

This field of the datagram header is mainly used to identify the combined length of UDP Header and Encapsulated data. It is a 16-bit field.

This field is mainly used to detect errors. It is a 16-bit field.

Given below are some of the characteristics of the User Datagram protocol:

Given below are different operations of UDP:

The User datagram protocol offers Connectionless Services which simply means that each user datagram that is sent by the UDP is an independent datagram. In different datagrams, there is no relationship, even if they are coming from the same source process and also going to the same destination program.

User datagram is a very simple and unreliable transport protocol. It does not provide any flow control mechanism and hence there is no window mechanism. Due to which the receiver may overflow with the incoming messages.

No error control mechanism is provided by UDP except checksum. Due to which the sender does not know if any message is has been lost or duplicated.

As there is a lack of flow control and error control it means that the process that uses the UDP should provide these mechanisms.

In order to send the message from one process to another, the user datagram protocol encapsulates and decapsulates the message in the form of an IP datagram.

Given below are some applications of the User datagram protocol:

Now its time to take a look at some well know port numbers used by User datagram protocol:

In User datagram protocol, generally, queues are associated with ports: 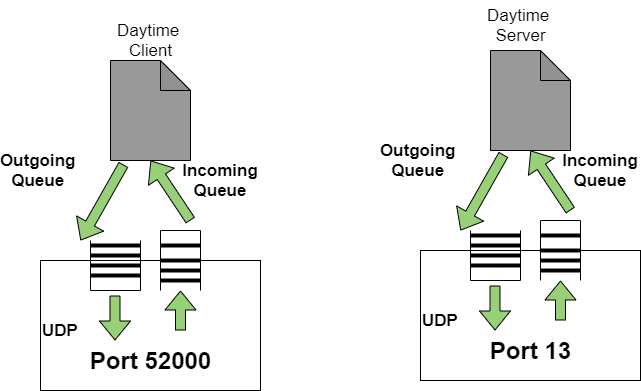 There are several processes that want to use the services provided by UDP.

Given below are some advantages of UDP:

Now its time to take a look at UDP:

1.There is a lack of guaranteed delivery.

2.There is no flow control.

3.There is no congestion control mechanism.