In this tutorial, we will be covering the concept of Multiplexing in Computer Networks.

The set of techniques that allows the simultaneous transmission of multiple signals across a single data link is commonly referred to as Multiplexing. Multiplexing is done by using the hardware that is called as Multiplexer(MUX).

The Multiplexer(MUX) mainly combines 'n' input lines in order to generate '1' output line(this is simply many-to-one) on the sender side. And on the receiver side, this stream is fed into the demultiplexer(DEMUX), which then separates the stream back to its component transmission (this is one-to-many) and then directs them to their corresponding lines.

The main aim of the multiplexing technique is to share scarce resources.

Let us understand with the help of a diagram given below to divide 1 link into n channels:

In the above diagram, the word link refers to the physical path, and the word channel simply refers to the portion of the link that carries a transmission between a given pair of lines. Thus 1 link can have many channels.

History of the Multiplexing

In telecommunications, several telephone calls may be carried by using a single wire. Also, Multiplexing was originated in telegraphy in the 1870s. Now, this technique is widely applied in communications. George Owen Squier in telephony was credited with the development of telephone carrier multiplexing in the year 1910.

Need for the Multiplexing

As we have already told you that multiplexing is basically a set of techniques that mainly allows the transmission of multiple signals simultaneously across a signals data link.

As it is very expensive to send many signals differently and it also requires more wires to send. Thus there is a need for multiplexing. Let us take an example of T.V cable distributor who sends many channels through a single wire.

Given below are some advantages of using Multiplexing:

Let us take a look at the given below figure to understand multiplexing vs no-multiplexing: 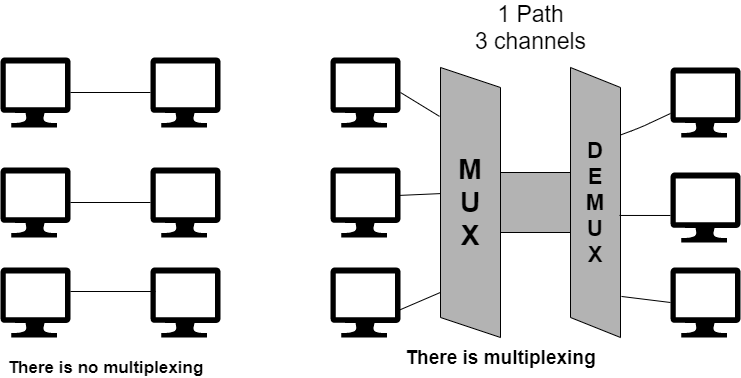 Let us take a look at the different categories of Multiplexing:

Let us discuss all the above-given categories one by one in the following sections.

From the above diagram, in FDM the transmission path is divided into three parts and each part mainly represents a channel that carries one transmission.

Given below are some advantages of using FDM:

There are some drawbacks of using FDM:

The main applications of FDM are as follows:

Let us take a look at the diagram given below where we will use prism for wavelength-division multiplexing and demultiplexing.

Given below are some advantages of using WDM:

There are some drawbacks of using WDM:

TDM is further categorized into two:

In Synchronous TDM, each of the Input connection has an allotment in the output even if it is not sending the data.

Another name of Asynchronous TDM is Statical Time Divison Multiplexing. In this time slots are not fixed, rather time slots are allocated dynamically in order to improve the efficiency of bandwidth.