In this tutorial, we will be covering the IGMP protocol in the Network layer in Computer Networks.

IGMP is an abbreviated form of Internet Group Management Protocol(IGMP). Mainly the Internet Protocol can be involved in the two types of communication i.e, Unicasting and multicasting.IGMP is one of the necessary but not the efficient protocol that is involved in Multicasting.

IGMP is basically a companion of Internet Protocol(IP).

IGMP is not a multicasting routing protocol but it is a protocol that manages the group membership. This protocol mainly helps the multicast routers in order to create and update a list of loyal members that are related to each router interface.

This protocol is used in streaming videos, gaming, or web conferencing tools.

There are two versions of IGMP: IGMPv1 and IGMPv2.

The version IGMPv2 has three types of messages:

There are two types of Query messages: General and Special

Let us now take a look at the format of IGMP(Version 2):

This is an 8-bit field and is mainly used to define the type of the message. The value of the type can be in both hexadecimal as well as binary notations.

The size of this field is 16 bit and it carries the checksum. The checksum is mainly calculated over the 8-byte message.

This protocol mainly works on the device that has the capability of handling multiple groups and used for dynamic multicasting; these devices mainly allow the host in order to join or leave the membership in the multicast group.

Also, these devices are allowed to add and remove the clients from the group.

IGMP protocol mainly operates in between the host and local multicast router.

L2 means level-2 devices like switches; these are mainly used in between the host and multicast router for the snooping of IGMP.

IGMP snooping: It is a process that is used to listen to the IGMP network traffic in a controlled manner.

If the Clients wish to join the network then they can send a join message in the query and then the switch intercepts the message and then adds the ports of clients to its multicast routing table.

The Internet Group Management Protocol operates locally. The Multicast router that is connected to the network mainly has a list of multicast addresses of the group with at least one loyal member in that network. And for each group, there is mainly one router that has the duty of distributing the multicast packets destined for that group.

This simply indicates that in the case if there are three multicast routers connected to a network then their list of groupids are mutually exclusive. 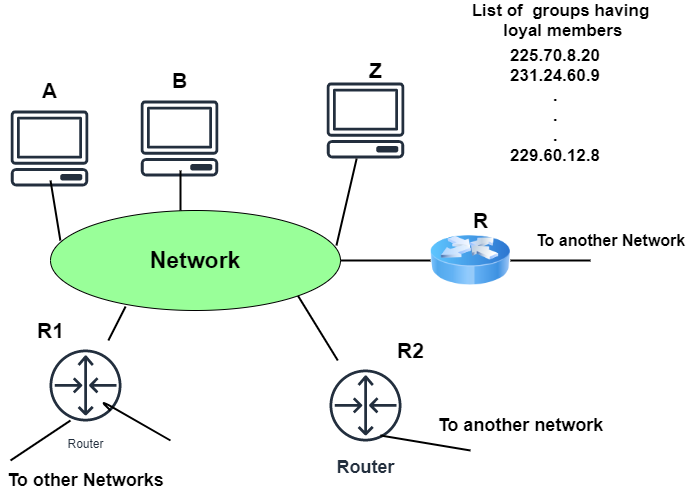 Given below are the operations of IGMP:

The listed below are some of the benefits offered by the IGMP:

Given below are some of the drawbacks of the IGMP :