In this tutorial, we will be covering the HTTP that is the protocol in the Application layer of the OSI Model.

The HTTP makes use of Client-server architecture. As we have already told you that the browser acts as the HTTP client and this client mainly communicates with the webserver that is hosting the website. 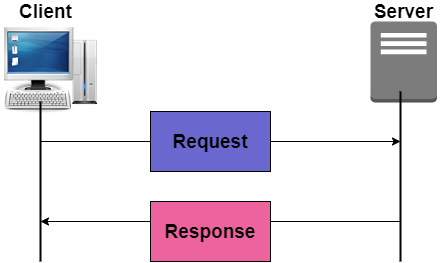 The figure shows the HTTP transaction

At the time when a client makes a request for some information (say client clicks on the hyperlink) to the webserver. The browser then sends a request message to the HTTP server for the requested objects.

After that the following things happen:

Let us take a look at the format of the request message and response message: 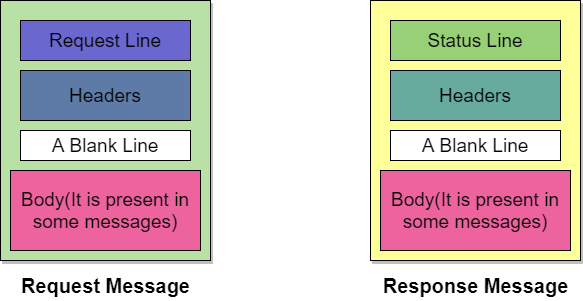 This field is used in the request line. The are several request types that are defined and these are mentioned in the table given below;

URL is a Uniform Resource locator and it is mainly a standard way of specifying any kind of information on the Internet.

The current version of the HTTP is 1.1.

This field is also used in the response message and it is used to explain the status code in the form of text.

The header is used to exchange the additional information between the client and the server. The header mainly consists of one or more header lines. Each header line has a header name, a colon, space, and a header value.

The header line is further categorized into four:

It can be present in the request message or in the response message. The body part mainly contains the document to be sent or received.

The HTTP offers various features and these are as follows:

Given below are the benefits of using HTTP:

There are some drawbacks of using the HTTP protocol:

The HTTP supports proxy servers. A proxy server is basically a computer that keeps the copies of the responses to recent requests. The proxy server mainly reduces the load on the originals server.In order to use the proxy server, the client must be configured in order to access the proxy instead of the target server.

HTTP connections can be further classified into two:

Let us discuss them one by one:

In the persistent HTTP connection, all the requests and their corresponding responses are sent over the same TCP connections. The 1.1 version of the HTTP specifies a persistent connection by default.

In a Persistent connection, a single TCP connection is mainly used for sending multiple objects one after the other.

In the Nonpersistent HTTP connection, one TCP connection is made for each request/response; it means there is a separate for each object.

Following are the steps used;

This connection imposes a high overhead on the server because N different buffers are required by the server, and the start procedure is slow each time when a connection is opened.

The nonpersistent connection is supported by the HTTP 1.0 version.