In this tutorial, we will be covering another protocol of the data link layer that is Point-To-Point Protocol.

PPP(Point-To-Point) protocol is a protocol used in the data link layer. The PPP protocol is mainly used to establish a direct connection between two nodes.

Some services that are not offered by the PPP protocol are as follows:

In the PPP protocol, the framing is done using the byte-oriented technique.

Given below figure shows the format of the PPP Frame:

Let us discuss each field of the PPP frame format one by one:

The PPP frame mainly starts and ends with a 1-byte flag field that has the bit pattern: 01111110. It is important to note that this pattern is the same as the flag pattern used in HDLC. But there is a difference too and that is PPP is a byte-oriented protocol whereas the HDLC is a bit-oriented protocol.

The value of this field in PPP protocol is constant and it is set to 11111111 which is a broadcast address. The two parties can negotiate and can omit this byte.

The value of this field is also a constant value of 11000000. We have already told you that PPP does not provide any flow control and also error control is limited to error detection. The two parties can negotiate and can omit this byte.

This field defines what is being carried in the data field. It can either be user information or other information. By default, this field is 2 bytes long.

This field carries the data from the network layer. The maximum length of this field is 1500 bytes. This can also be negotiated between the endpoints of communication.

It is simply a 2-byte or 4-byte standard CRC(Cyclic redundancy check).

As we have told you that the major difference between PPP and HDLC is that PPP is a byte-oriented protocol. It means that the flag in the PPP is a byte and it is needed to be escaped wherever it appears in the data section of the frame.

The escape byte is 011111101 which means whenever the flag-like pattern appears in the data then the extra byte is stuffed that mainly tells the receiver that the next byte is not a flag.

Transition Phases in the PPP Protocol

The PPP protocol has to go through various phases and these are shown in the diagram given below; 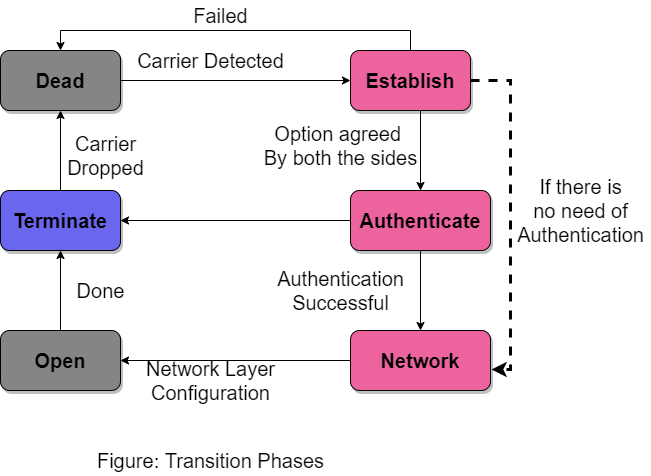 In this phase, the link is not being used.No active carrier is there at the physical layer and the line is simply quiet.

If one of the nodes starts the communication then the connection goes into the established phase. In this phase, options are negotiated between the two parties. In case if the negotiation is done successfully then the system goes into the Authenticate phase (in case if there is the requirement of authentication otherwise goes into the network phase.)

If the result of this is successful then the connection goes into the networking phase otherwise goes into the termination phase.

In case if any node is running multiple protocols at the network layer simultaneously then the receiving node needs to know that which protocol will receive the data.

In this phase the transfer of the data takes place. Whenever a connection reaches this phase, then the exchange of data packets can be started. The Connection remains in this phase until one of the endpoints in the communication terminates the connection.

In this phase, the connection is terminated. There is an exchange of several packets between two ends for house cleaning and then closing the link.

Basically, PPP is a layered protocol. There are three components of the PPP protocol and these are as follows: 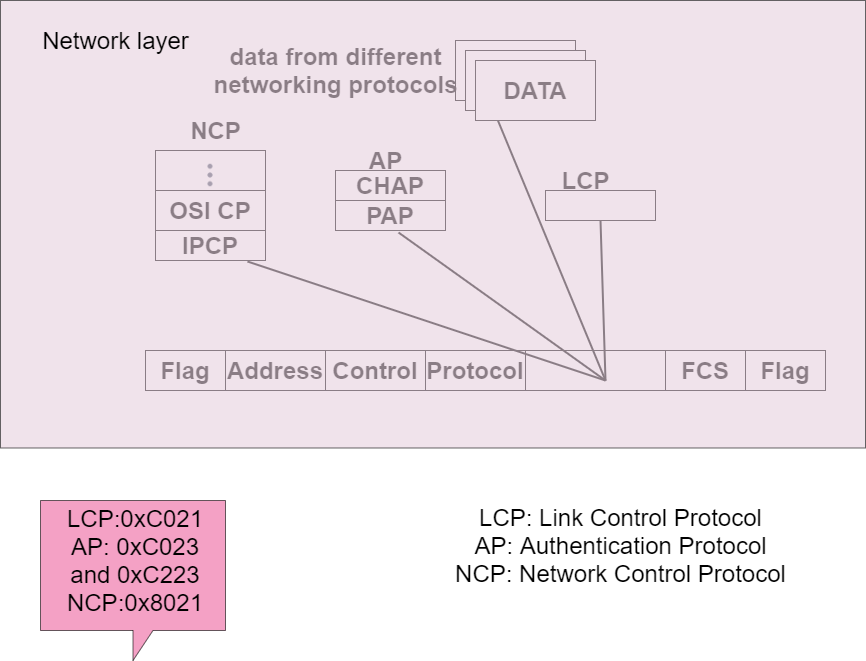 This protocol is mainly responsible for establishing, maintaining, configuring, and terminating the links. The link control protocol provides the negotiation mechanism in order to set the options between the two endpoints.

Both endpoints of the link must need to reach an agreement about the options before the link can be established.

This protocol plays a very important role in the PPP protocol because the PPP is designed for use over the dial-up links where the verification of user identity is necessary. Thus this protocol is mainly used to authenticate the endpoints for the use of other services.

There are two protocols for authentication:

The Network Control Protocol is mainly used for negotiating the parameters and facilities for the network layer.

For every higher-layer protocol supported by PPP protocol; there is one Network control protocol.

Some of the Network Control protocol of the PPP are as follows;