Unguided medium transport electromagnetic waves without using a physical conductor. This type of communication is often referred to as wireless communication. Signals are normally broadcast through free space and thus are available to anyone who has a device capable of receiving them.

The below figure shows the part of the electromagnetic spectrum, ranging from 3 kHz to 900 THz, used for wireless communication.

Unguided signals can travel from the source to the destination in several ways: Gound propagation, Sky propagation and Line-of-sight propagation as shown in below figure.

We can divide wireless transmission into three broad groups:

Radio waves are omnidirectional. When an antenna transmits radio waves, they are propagated in all directions. This means that the sending and receiving antennas do not have to be aligned. A sending antenna send waves that can be received by any receiving antenna. The omnidirectional property has disadvantage, too. The radio waves transmitted by one antenna are susceptible to interference by another antenna that may send signal suing the same frequency or band.

Radio waves use omnidirectional antennas that send out signals in all directions. 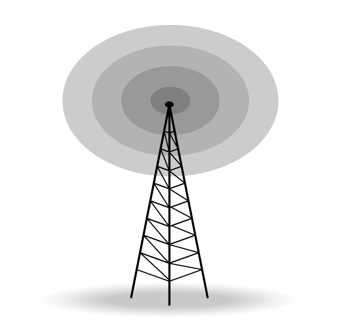 Electromagnetic waves having frequencies between 1 and 300 GHz are called micro waves. Micro waves are unidirectional. When an antenna transmits microwaves, they can be narrowly focused. This means that the sending and receiving antennas need to be aligned. The unidirectional property has an obvious advantage. A pair of antennas can be aligned without interfering with another pair of aligned antennas.

The following describes some characteristics of microwaves propagation:

Microwaves need unidirectional antennas that send out signals in one direction. Two types of antennas are used for microwave communications: Parabolic Dish and Horn. 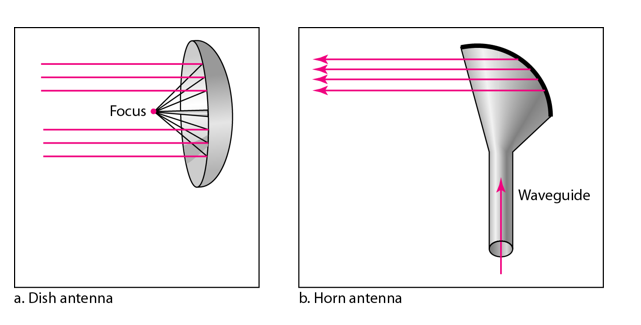 A parabolic antenna works as a funnel, catching a wide range of waves and directing them to a common point. In this way, more of the signal is recovered than would be possible with a single-point receiver.

A horn antenna looks like a gigantic scoop. Outgoing transmissions are broadcast up a stem and deflected outward in a series of narrow parallel beams by the curved head. Received transmissions are collected by the scooped shape of the horn, in a manner similar to the parabolic dish, and are deflected down into the stem.

Microwaves, due to their unidirectional properties, are very useful when unicast(one-to-one) communication is needed between the sender and the receiver. They are used in cellular phones, satellite networks and wireless LANs.

There are 2 types of Microwave Transmission :

For increasing the distance served by terrestrial microwave, repeaters can be installed with each antenna .The signal received by an antenna can be converted into transmittable form and relayed to next antenna as shown in below figure. It is an example of telephone systems all over the world

There are two types of antennas used for terrestrial microwave communication :

In this every line parallel to the line of symmetry reflects off the curve at angles in a way that they intersect at a common point called focus. This antenna is based on geometry of parabola.

It is a like gigantic scoop. The outgoing transmissions are broadcast up a stem and deflected outward in a series of narrow parallel beams by curved head. This is a microwave relay station which is placed in outer space. The satellites are launched either by rockets or space shuttles carry them.

These are positioned 36000 Km above the equator with an orbit speed that exactly matches the rotation speed of the earth. As the satellite is positioned in a geo-synchronous orbit, it is stationery relative to earth and always stays over the same point on the ground. This is usually done to allow ground stations to aim antenna at a fixed point in the sky.

Infrared waves, with frequencies from 300 GHz to 400 THz, can be used for short-range communication. Infrared waves, having high frequencies, cannot penetrate walls. This advantageous characteristic prevents interference between one system and another, a short-range communication system in on room cannot be affected by another system in the next room.