TCP/IP means Transmission Control Protocol and Internet Protocol. It is the network model used in the current Internet architecture as well. Protocols are set of rules which govern every possible communication over a network. These protocols describe the movement of data between the source and destination or the internet. They also offer simple naming and addressing schemes. 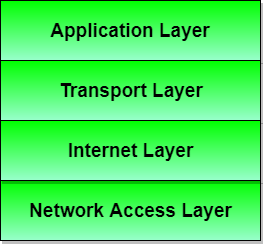 Protocols and networks in the TCP/IP model:

TCP/IP that is Transmission Control Protocol and Internet Protocol was developed by Department of Defence's Project Research Agency (ARPA, later DARPA) as a part of a research project of network interconnection to connect remote machines.

The features that stood out during the research, which led to making the TCP/IP reference model were:

The overall idea was to allow one application on one computer to talk to(send data packets) another application running on different computer.

Below we have discussed the 4 layers that form the TCP/IP reference model:

The TCP/IP specifications described a lot of applications that were at the top of the protocol stack. Some of them were TELNET, FTP, SMTP, DNS etc.