To understand system calls, first one needs to understand the difference between kernel mode and user mode of a CPU. Every modern operating system supports these two modes. 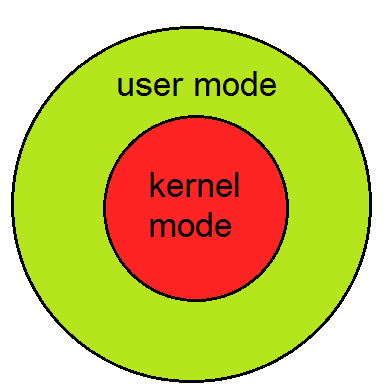 Modes supported by the operating system

When a program in user mode requires access to RAM or a hardware resource, it must ask the kernel to provide access to that resource. This is done via something called a system call.

When a program makes a system call, the mode is switched from user mode to kernel mode. This is called a context switch.

Then the kernel provides the resource which the program requested. After that, another context switch happens which results in change of mode from kernel mode back to user mode.

Generally, system calls are made by the user level programs in the following situations:

In a typical UNIX system, there are around 300 system calls. Some of them which are important ones in this context, are described below.

The fork() system call is used to create processes. When a process (a program in execution) makes a fork() call, an exact copy of the process is created. Now there are two processes, one being the parent process and the other being the child process.

Both processes start execution from the next line of code i.e., the line after the fork() call. Let's look at an example:

When the above example code is executed, when line A is executed, a child process is created. Now both processes start execution from line B. To differentiate between the child process and the parent process, we need to look at the value returned by the fork() call.

The exec() system call is also used to create processes. But there is one big difference between fork() and exec() calls. The fork() call creates a new process while preserving the parent process. But, an exec() call replaces the address space, text segment, data segment etc. of the current process with the new process.

It means, after an exec() call, only the new process exists. The process which made the system call, wouldn't exist.

There are many flavors of exec() in UNIX, one being exec1() which is shown below as an example: