In this tutorial, we will cover the concept of Contiguous Memory Allocation in an Operating System. 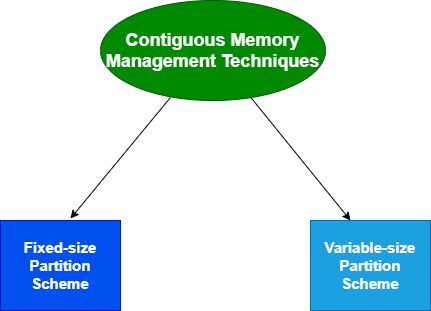 We will cover the concept of different Contiguous Memory allocation techniques one by one.

This technique is also known as Static partitioning. In this scheme, the system divides the memory into fixed-size partitions. The partitions may or may not be the same size. The size of each partition is fixed as indicated by the name of the technique and it cannot be changed.

In this partition scheme, each partition may contain exactly one process. There is a problem that this technique will limit the degree of multiprogramming because the number of partitions will basically decide the number of processes.

Whenever any process terminates then the partition becomes available for another process.

Let's take an example of fixed size partitioning scheme, we will divide a memory size of 15 KB into fixed-size partitions:

If there is some wastage inside the partition then it is termed Internal Fragmentation. 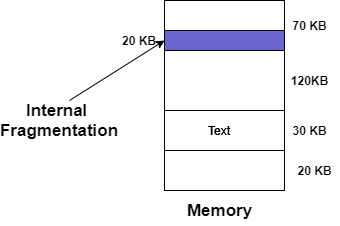 Some disadvantages of using this scheme are as follows:

As we have shown in the above diagram the 70 KB partition is used to load a process of 50 KB so the remaining 20 KB got wasted.

2. Limitation on the size of the process

It is another drawback of the fixed-size partition scheme as total unused space by various partitions cannot be used in order to load the processes even though there is the availability of space but it is not in the contiguous fashion.

4. Degree of multiprogramming is less

This scheme is also known as Dynamic partitioning and is came into existence to overcome the drawback i.e internal fragmentation that is caused by Static partitioning. In this partitioning, scheme allocation is done dynamically.

As partition size varies according to the need of the process so in this partition scheme there is no internal fragmentation. 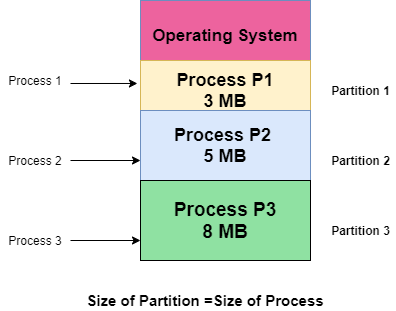 Some Advantages of using this partition scheme are as follows:

Some Disadvantages of using this partition scheme are as follows: