Parallel Processing and Data Transfer Modes in a Computer System

Instead of processing each instruction sequentially, a parallel processing system provides concurrent data processing to increase the execution time.

In this the system may have two or more ALU's and should be able to execute two or more instructions at the same time. The purpose of parallel processing is to speed up the computer processing capability and increase its throughput.

NOTE: Throughput is the number of instructions that can be executed in a unit of time. 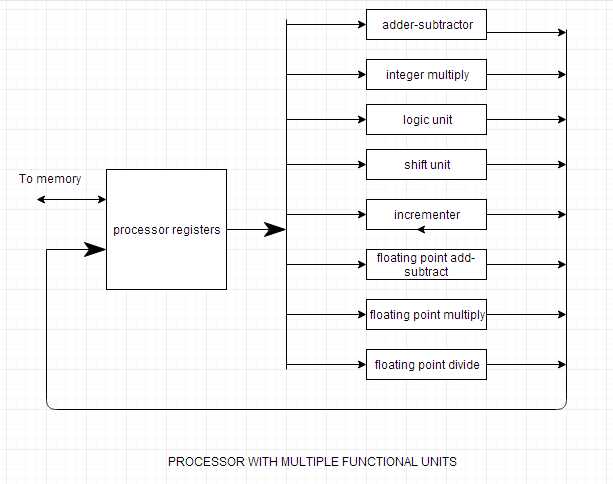 According to the data transfer mode, computer can be divided into 4 major groups:

It represents the organization of a single computer containing a control unit, processor unit and a memory unit. Instructions are executed sequentially. It can be achieved by pipelining or multiple functional units.

It represents an organization that includes multiple processing units under the control of a common control unit. All processors receive the same instruction from control unit but operate on different parts of the data.

They are highly specialized computers. They are basically used for numerical problems that are expressed in the form of vector or matrix. But they are not suitable for other types of computations

It consists of a single computer containing multiple processors connected with multiple control units and a common memory unit. It is capable of processing several instructions over single data stream simultaneously. MISD structure is only of theoretical interest since no practical system has been constructed using this organization.

It represents the organization which is capable of processing several programs at same time. It is the organization of a single computer containing multiple processors connected with multiple control units and a shared memory unit. The shared memory unit contains multiple modules to communicate with all processors simultaneously. Multiprocessors and multicomputer are the examples of MIMD. It fulfills the demand of large scale computations.