A Boolean Algebra is an algebra(set, operations, elements) consisting of a set B with >=2 elements, together with three operations- the AND operation(Boolean Product), the OR operation(Boolean Sum), and the NOT operation(Complement) - defined on the set, such that for any element a, b, c…. of set B, a*b, a+b and a' are in B.

Here are some key terms of the Boolean Algebra with a brief description about them:

A Boolean function can be transformed from an algebraic expression into a logic diagram composed of AND, OR and NOT gates.

The purpose of Boolean algebra is to facilitate the analysis and design of digital circuits. It provides a convenient tool to:

A Boolean function specified by a truth table can be expressed algebraically in many different ways. Two ways of forming Boolean expressions are Canonical and Non-Canonical forms.

It expresses all binary variables in every product(AND) or sum(OR) term of the Boolean function. To determine the canonical sum-of-products form for a Boolean function F(A, B, C) = A'B + C' + ABC, which is in non-canonical form, the following steps are used:

where x + x' = 1 is a basic identity of Boolean algebra

By manipulating a Boolean expression according to Boolean algebra rules, one may obtain a simpler expression that will require fewer gates.

The below table lists the most basic identities of Boolean algebra. All the identities in the table can be proven by means of truth tables. 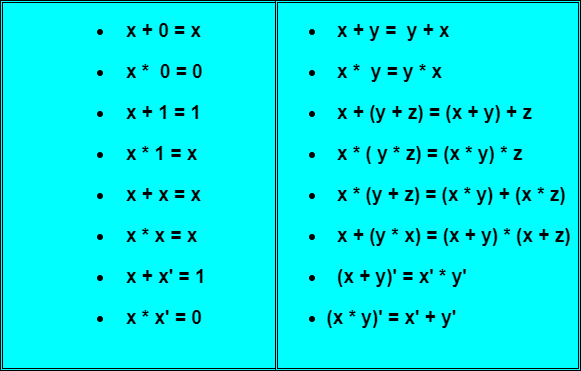