As the name implies, a read-only memory(ROM) is a memory unit that performs the read operation only; it does not have a write capability. This implies that the binary information stored in a ROM is made permanent during the hardware production of the unit and cannot be altered by writing different words into it.

Whereas a RAM is a general-purpose device whose contents can be altered during the computational process, a ROM is restricted to reading words that are permanently stored within the unit. The binary information to be stored, specified by the designer, is then embedded in the unit to form the required interconnection pattern. ROMs come with special internal electronic fuses that can be programmed for a specific configuration. Once the pattern is established, it stays within the unit even when power is turned off and on again.

An m x n ROM is an array of binary cells organized into m words of n bits each. As shown in the block diagram below, a ROM has k address input lines to select one of 2k = m words of memory, and n input lines, one for each bit of the word. An integrated circuit ROM may also have one or more enable inputs for expanding a number of packages into a ROM with larger capacity. 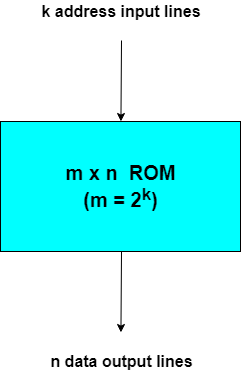 The ROM does not need a read-control line since at any given time, the output lines automatically provide the n bits of the word selected by the address value. Because the outputs are a function of only the present inputs (the address lines), a ROM is classified as a combinational circuit. In fact, a ROM is constructed internally with decoders and a set of OR gates. There is no need for providing storage capabilities as in RAM, since the values of the bits in the ROM are permanently fixed.

ROMs find a wide range of applications in the design of digital systems. As such, it can implement any combinational circuit with k inputs and n outputs. When employed in a computer system as a memory unit, the ROM is used for storing fixed programs that are not to be altered and for tables of constants that are not subject to change. ROM is also employed in the design of control units for digital computers. As such, they are used to store coded information that represents the sequence of internal control variables needed for enabling the various operations in the computer. A control unit that utilizes a ROM to store binary control information is called a microprogrammed control unit.

The required paths in a ROM may be programmed in three different ways.

Example applications of EEPROM devices are: