What are Digital Computers?

The decimal digits 0, 1, 2, ..., 9, for example, provide 10 discrete values. The first electronic digital computer, developed in the late 1940s, was used primarily for numerical computations and the discrete elements were the digits. From this application the term digital computer emerged.

Computer Organization is concerned with the way the hardware components operate and the way they are connected together to form the computer system.

The various components are assumed to be in place and the task is to investigate the organizational structure to verify that the computer parts operate as intended.

Computer Design is concerned with the hardware design of the computer. Once the computer specifications are formulated, it is the task of the designer to develop hardware for the system.

Computer design is concerned with the determination of what hardware should be used and how the parts should be connected. This aspect of computer hardware is sometimes referred to as computer implementation.

Computer Architecture is concerned with the structure and behaviour of the computer as seen by the user.

It includes the information, formats, the instruction set, and techniques for addressing memory. The architectural design of a computer system is concerned with the specifications of the various functional modules, such as processors and memories, and structuring them together into a computer system.

von Neumann envisioned the structure of a computer system as being composed of the following components:


Block diagram of a Digital Computer 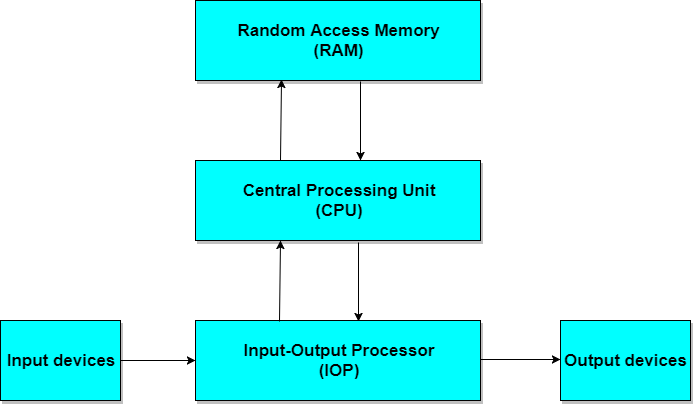 The Harvard architecture uses physically separate storage and signal pathways for their instructions and data. The term originated from the Harvard Mark I and the data in relay latches (23- digits wide).

In a computer with Harvard architecture, the CPU can read both an instruction and data from memory at the same time, leading to double the memory bandwidth.