An array works fine when we have to implement sequential data structures like arrays, except it is static, i.e. we have to define its maximum size during its initialization and it cannot contain elements greater than its maximum size. Now suppose, if during the program execution we have to store elements more than its size, or if we are reading input stream of elements and we do not know the upper bound of the number of elements, there are high chances of occurrence of index_out_bound exception or unwanted termination of the program.

We can do one thing, initialize the array with maximum size allowed by the complier, i.e. 10^6 elements per array, but that is highly space consuming approach and there is a wastage of space if number of elements to be entered are way too less, thus this approach is never used in programming.

Solution of the above problem is dynamic arrays! They have dynamic size, i.e. their size can change during runtime. Container library provides vectors to replicate dynamic arrays.

SYNTAX for creating a vector is: vector< object_type > vector_name;

Vector being a dynamic array, doesn't needs size during declaration, hence the above code will create a blank vector. There are many ways to initialize a vector like,

Note that this type of initialization works only in C++ 11 and above. You can also initialize the vector based on the range of other vectors, like :

The above code initialize the vector by elements pointed by iterators returned by v1.begin() and v2.end(), begin() and end() are the same function we have studied with array, they work same with vectors.

You can also initialize a vector with one element a certain number of times, like :

These are me of the ways using which you can initialize your vector, but remember, initializing your vector using another vector or by using elements directly does not limit its size, its size will always be dynamic, and more elements can be inserted into the vector, whenever required.

Following are some of the most commonly used functions for vector container in STL:

The following illustration will show how push_back() works:

insert(itr, element) method inserts the element in vector before the position pointed by iterator itr.

The following illustration will show how insert works : 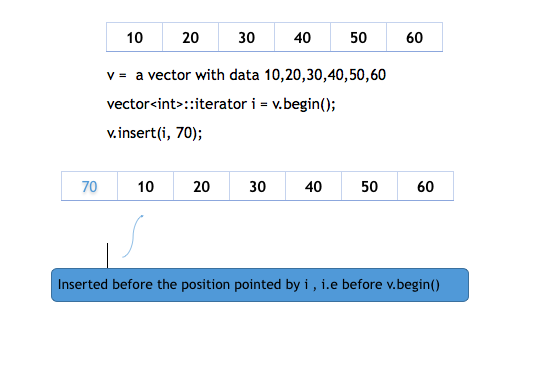 insert function can be overloaded by third argument, count as well. This count parameter defines how many times the element is to be inserted before the pointed position.

This method can also be used to insert elements from any other vector in given range, specified by two iterators, defining starting and ending point of the range.

Above code will insert the elements from v2.begin() to v2.end() before index pointed by i.

pop_back() is used to remove the last element from the vector. It reduces the size of the vector by one.

Below is an example:

erase(itr_pos) removes the element pointed by the iterator itr_pos. erase method can also be overloaded with an extra iterator specifying the end point of the range to be removed, i.e erase(itr_start, itr_end).

The following code will illustrate erase:

For example, If the size of the vector is 4 right now, with elements {10, 20, 30, 40} and we use resize method to resize it to size 5. Then by default a fifth element with value 0 will be inserted in the vector. We can specify the data to not be zero, by explicitly mentioning it as the val while calling the resize method.

If we have two vectors v1 and v2 and we want to swap the elements inside them, you just need to call v1.swap(v2), this will swap the values of the two vectors.

This method clears the whole vector, removes all the elements from the vector but do not delete the vector.

For a vector v, v.clear() will clear it, but not delete it.

This method returns the size of the vector.

This method returns true if the vector is empty else returns false.

This method returns the number of elements that can be inserted in the vector based on the memory allocated to the vector.

This method works same in case of vector as it works for array. vector_name.at(i) returns the element at ith index in the vector vector_name.


front and back functions