In this tutorial, we will learn how to integrate the Nmap security scanner with our Post scanner program.

Nmap(Network Mapper) is a security scanner, originally written by Gordon Lyon(also known by his pseudonym Fyodor Vaskovich), and used to discover hosts and services on a computer network, thereby building a map of the network. To accomplish its goal, Nmap sends specially crafted packets to the target host(s) and then analyzes their responses.

Some of the useful Nmap features include:

Although Nmap is a command line interface, you can download and install the GUI interface for Nmap known as zenmap. 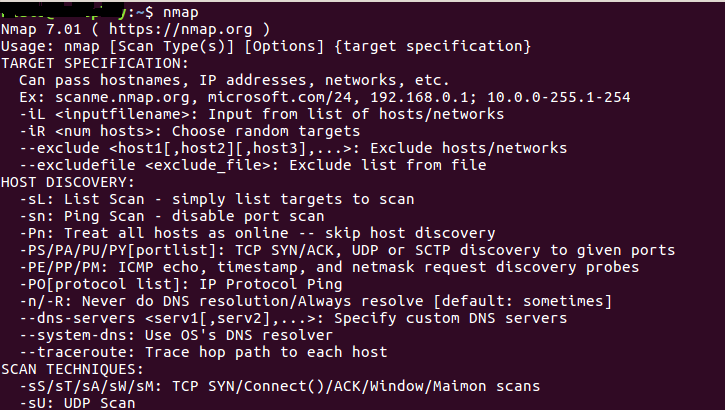 Above is the screenshot of the command line, when you run nmap command, all the options available for Target specifications and Host discovery, Scan Techniques etc are listed for your assistance. In case you want to install nmap in your machine, then:

The Port scanner program that we wrote in the last tutorial provides a quick script for performing a TCP connect scan. This is very limited as we might require the ability to perform additional scan types such as ACK, RST, FIN, or SYN-ACK scans provided by the Nmap toolkit. Nmap, delivers a rather extensive amount of functionality. This begs the question, why not just use Nmap? Why bother about writing a script for Port scanner?

Nmap is written in C and LUA programming languages, and can be easily integrated into Python. Nmap produces XML based output which provides us with the ability to utilize the full functionality of Nmap from within a Python script. So our Port Scanner script is just the outer shell, inside it we will be using Nmap now.

Below are the commands which can be used to successfully scan all the ports and return the results in a JSON format.

We all know, what import nmap is for, it is to import the nmap module to our python script. Then we initialise the Nmap PortScanner to scan the ports on our local network.

Let's talk about a few of the methods used above. The method all_protocols() returns the protocol for the current network being scanned. The method keys() returns all the active ports available within the specified range.

When we used the keys() method on our local computer, only the port 80 was returned, because no other port in the specified range is active.

Below we have a simple program, to scan and list the ports for a given host: