How to Connect Android Phone to TV?

If you have a smart TV, then often, once in a while, you would want to share a movie or a video from your Android device to display on the larger screen of your TV.

Well, smart TVs are all compatible with Android devices to transfer and play a file. However, there are quite a few ways to do so.

Lastly, you can use a Third-party application for the connection of your Android device to the TV.

However, just knowing the methods to connect won't resolve the questions you have, therefore in this article, we have mentioned each way elaborately to guide you to connect your Android phone to TV.

How to Connect Android Phone to TV using Chromecast

Though most of the smart TV is based on Android and has built-in support for Chromecast. Chromecast is a handy feature to transfer your Android phone Display to your TV with just a few clicks.

However, not all Android apps support the Chromecast feature. Some apps that support Chromecast are Netflix, HULU, Youtube, HBO NOW, and Google Photos.

The critical requirement for the Chromecast feature is to ensure that both your smart TV and your Android phone are connected to the Wi-Fi network. After that, open up the app that supports Chromecast, play the video on your Android phone, and click on the square Cast icon.

Shortly after, you will see your TV as an available device to connect, select your TV and start casting.

Keep in mind that a few apps will black out while launching any copy-righted content, such as Netflix during screen mirroring.

Android Screen Mirroring is an official app by Google to screen mirror and share displays with any devices, including smart TVs.

After checking, you can head over to the Google Play Store and download and install the Android Screen Mirroring application.

However, it is not necessary to download and install the Android Screen Mirroring app because the app's feature is presented in the Google Home app, which is by default installed in almost all Android smartphones.

Since the Android Screen Mirroring feature uses the Chromecast functionality, you have to make sure that your TV and android smartphone are connected to the same Wi-Fi network.

Then open up the Google Home app and search for devices to cast by clicking on the Plus icon at the top left corner.

From the list of available devices, select your TV. To connect, you could also choose the cast device from the Google Home app and then click on the Cast my Screen button below.

Shortly after, you will notice that your TV is displaying your Android phone display.

One significant advantage of using the Android Screen Mirroring feature is that it can cast any app to your TV, even if it doesn't support the Chromecast element; however, it copies-righted content from Netflix, HULU, and other services will still blackout during casting.

To stop the screen mirroring, click on the Stop mirroring button in the Google Home app on your smartphone.

For Fire TV and Roku Streaming devices, there is also a built-in compatibility feature for screen mirroring. Also, the screen reflecting element varies from manufacturers to Android versions. For example, Samsung has a feature called Smart View instead of Chromecast. However, both are different.

Many smartphones with later Android versions of 5.0 Lollipop all support Chromecast, and many have a dedicated Chromecast button in the pull-down settings or the Android settings.

All the intelligent TVs shipped with an HDMI port installed to connect to a PC for external display. However, you could utilize the HDMI feature using an adapter to connect your Android device to the TV.

This method of connecting your devices won't be wireless, and you won't have to interact with any application to do so.

Hence it makes it the most viable solution if your TV doesn't support the Chromecast feature. 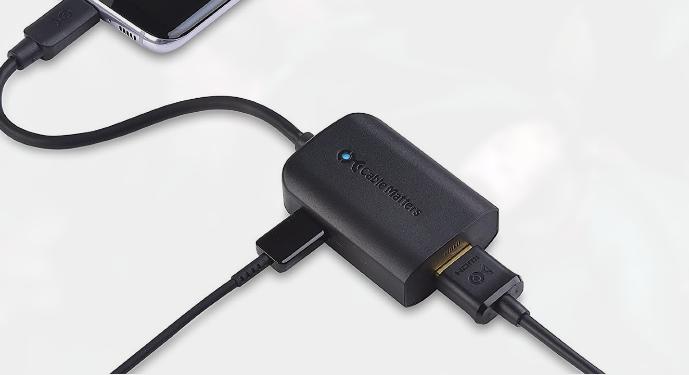 Most of the modern Android devices come with USB Type-C support.

Therefore you should buy an HDMI to USB-C adapter. If your Android device has USB 3.0, 2.1, or micro USB, search and purchase the HDMI Adapter for the particular USB support.

Once you have the adapter, the process is quite simple, connect the USB-C cable to the adapter and your Android device, then click the HDMI to your TV and the Adapter.

If you are using a micro USB to HDMI adapter, then make sure you select the MHL protocol on your Android device for Video output.

How to Connect Android Phone to TV using DLNA

The Digital Living Network Alliance (DLNA) is a feature that is available to all Android users, and every internet-connected TVs support DLNA.

Hence, it is ideal if you want to cast but don't want to buy an adapter and don't have the Chromecast feature.

However, you cannot stream any DRM content like Netflix using DLNA. You can play your music, video and can stream from free services.

To use the DLNA feature, make sure both the TV and Android devices are connected to the same Wi-Fi devices, turn on the DLNA switch for both TV and Android phones, in the phone search for other DLNA devices, select your TV.

The best way to utilize DLNA entirely is to use third-party applications like LocalCast.

Using LocalCast, you won't have to screen mirror your Android phone, but you will still play files from your Android device. Another similar application like LocalCast is AllCast. Both are similar and have ads, you have to upgrade to the premium version to get rid of the ads, and both can stream a few online contents.

Media management apps such as VLC, Plex can be used as a DLNA streamer.