NLP (Natural Language Processing) is a subfield of Computer Science and Artificial intelligence which involves making computers to successfully process natural language (like English, French, Hindi and so on for easy interaction with humans).

Natural Language Understanding(NLU) is a subset of NLP which is still the greatest challenge in Artificial Intelligence domain as it involves making the machine/system understand what a user is saying/communicating. Although, with a good NLP system in place, we can perform some of the major tasks like breaking a sentence, comprehending its meaning, responding to the user (Automated voice/text as a reply to user's command), determining the action in the sentence etc.

Natural Language is the language used by humans for communication either in the form of text or speech. With the increasing ways to socialize through Social Media platforms and websites, we are having access to a huge amount of natural language in the form of Blogs, books, reports, emails, reviews, tweets, etc., With this huge data, when properly annotated, a machine can be made intelligent to understand the human language hence improving data analysis, categorization and collection.

Annotation is the process of adding metadata (information useful to describe data) to markup the elements of a dataset. Using which, when a machine is trained it can work with more precision and effectiveness.

If we need to understand the sentiments of a user based on his review of a Hotel or a movie, first we need to take the text of the review published. This whole text(sentence or paragraph) is divided into separate words. Then, in the program, we maintain a bag of words which can identify the sentiment score of any particular word.

'Avengers: Endgame' is of course entirely preposterous and, yes, the central plot device here does not, in itself, deliver the shock of the new. But the sheer enjoyment and fun that it delivers, the pure exotic spectacle, are irresistible, as is its insouciant way of combining the serious and the comic.
- Source Peter Bradshaw review

The words that are bold in the above example text are positive words, which makes the review positive. Of course, in real, sentiment analysis is much more complex and lots of metrics and other measures are involved, which are then used to train a classifier like Naïve Bayes and then predict the sentiment score of a new review/text.

But in this example, I want to focus mainly on the tasks to be carried out in any NLP based algorithm or problem.

Some Basic Tasks in NLP:

We are going to see how to perform these tasks using Python's NLTK (Natural Language Tool Kit) library.

After installing Python and PIP, use the following command to download and install all the required data analysis libraries like lexicons, corpora and other tools of NLTK

Use the following pip commands to install the nltk library,

The above commands will only install NLTK core library, but not the lexicons and corpora. These can be downloaded by following the below specified steps.

Open an interactive python shell and execute the following command:

or create a python file(downloadNltk.py) with the following commands and execute the file using the command: python downloadNltk.py 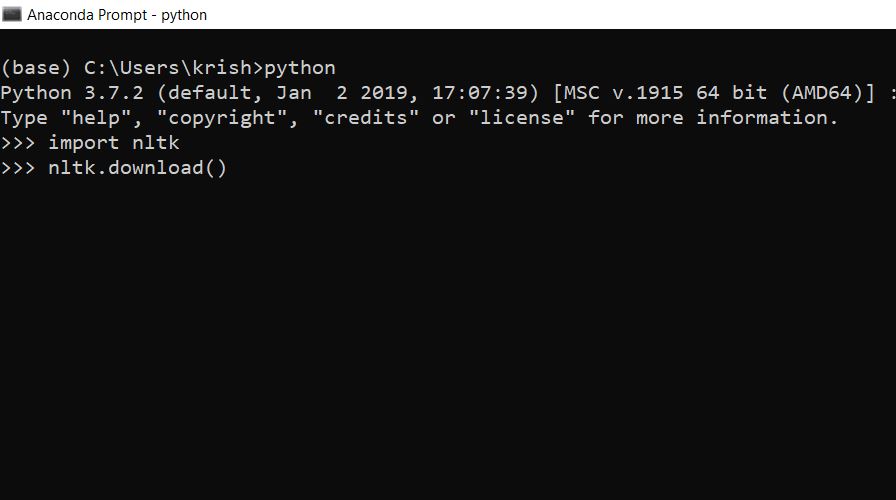 Executing the command will open a GUI window for prompting the user to select and download the corpora and lexicons tools.

Select all option and click Download, this will download all the packages. You don't need to change the download directory, it's better to leave it as is. This will take some time and after a few minutes, this will complete downloading the packages and then our system will be ready to use NLTK with all the modules in our program. 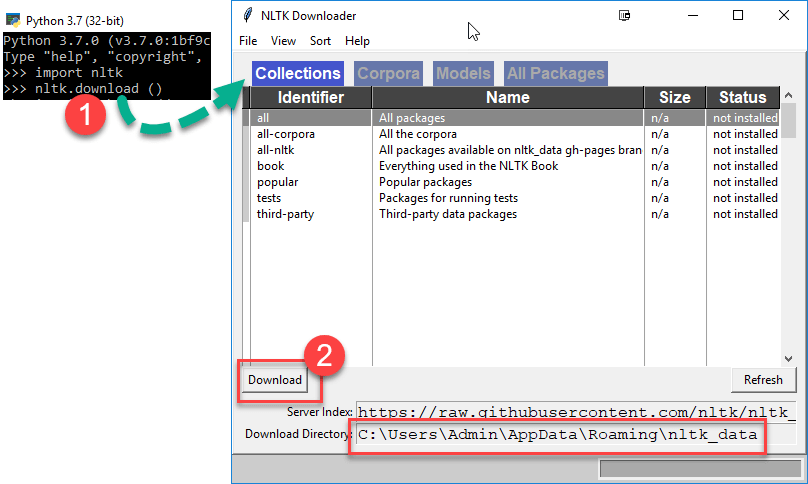 A simpler way to download all these packages using a single line command is as follows:

The process of breaking the sentence or set of text into individual words called tokens (in languages like English) is called Tokenization. There are two types of tokenization:

You might think this task of tokenization can be performed manually by us, simply by writing a small piece of code, splitting the text at the full stop or space, or something else. Nut we do not have to worry about all this because this is handled by the NLTK library's tokenize module.

The first line of the program imports the sent_tokenize(sentence tokenizer) and word_tokenize(word tokenizer) modules from the nltk.tokenize module.

When the above code is executed, a prompt to the user is shown to enter a paragraph, this raw text is given to sent_tokenize() method as an input, which will return a list of sentences(tokens) in the given paragraph. The sent_tokenize() method takes a required parameter text and an optional parameter language. This optional parameter by default uses English as the language for tokenizing.

In the image below we have shown an input text(Endgame's review) and the output for sent_tokenize and word_tokenize methods:

Parts of speech tagging is the process of attaching the Parts-Of-Speech to each and every word/token with their specific tag. POS tagging helps in a lot of applications, like taking a sentence and identify the action happening based on VERB tag from the POS-tagged text. Similarly there are a lot of applications based on this POS tagging. The pos_tag method is available in the NLTK module and can be imported by using the following statement:

As shown in the syntax, the pos_tag() method takes tokens as input(which can be generated using the word_tokenize() method). It also has the optional parameters lang for defining the language for POS tagging and the tagset parameter to use which tagset(brown or universal or wsj) to be used for tagging the parts-of-speech. The lang parameter accepts different languages like Russian and can be used by passing the value as rus.

The following program takes a sentence and then tokenize it first and the generated tokens are sent to this pos_tag(), the output is a list of tuples. Each tuple is having the token and a tag for that token.

To understand these tags, you might need a reference. To get this reference you can use the inbuilt help command in the python interpreter shell.

Or you can use this in your program as follows:

This will display all the POS tags along with their meaning and some example words. For example:

If you are going to perform POS tagging for multiple sentences, this pos_tag method works fine, but we have a more efficient method named pos_tag_sents() which tags the sentences with respective POS tags.

Consider a large document, the document contains a lot of information in the form of text. Let us suppose you wanted to write down a program which counts the frequency of different words in the document. You might first use the tokenization technique to get a list of words, and then write a few lines of code to find the frequency of words. But in the later stage, you might find that, there are words which have the same meaning but have different morphological forms.

For example, the word standard can be written in the following ways based on the requirement of the author:

The PortStemmer module is imported using the following statement, available in nltk.stem

In order to use this PortStemmer class, we have to use following code statements:

Using this PortStemmer object we will access the stem() method which takes a word/token and will return the available root word. The method actually converts the word to lower case and then apply its logic to return the root word.

In the program, we just did Suffix Stripping, which is nothing but removing suffixes from a word. Some of the common suffixes are -es, -ing, etc.

This causes some of problems with Stemming. To understand those problems let us try to run the above Stemming Code snippet with the word Multiplicativity. If you think that after stemming the root word will be Multiple or Multiplicative, then you are wrong.

After stemming of the word multiplicativity, the root word is returned as multipl, removing the inflection -icative suffix.

So in Stemming, the problem is that it will remove the inflection and gives a word, which may or may not be a word with a meaning.

Unlike stemming, lemmatization rather gives the root word which has a meaning and does belong to the same language. But this doesn't mean that Lemmatization is always better than Stemming, it varies based on your application and domain where you are using them.

The WordNetLemmatizer module is imported using the following statement, available in nltk.stem

In order to use this WordNetLemmatizer class, we have to create an object for it using the following statement and then call the lemmatize() method using it. This will return the proper root word belonging to the language.

Stop words are the words which are commonly used in a language, some of the stop words are: the, be, at, by, can, cannot, me, my, etc. In most of the cases we might not need these words for our task. Hence we remove these words before or after processing of natural language data(text).

We know that in our library NLTK, there are a lot of corpus already downloaded during the installation. So we already have a list of Stop Words as a corpus in the NLTK library.

We can import it using the following statement:

Here we sent the parameter English which means it will return the stop words in English Language. Some of the other languages you can pass are as follows: Spanish, French, Russian etc.

You can observe that all the stop words are removed from the list. If you have a list of Stop Words that you want, you can just load them from a TEXT/CSV file and store it in a list.

As you have seen the basic tasks that can be done using NLP, let us see some of the real-world applications where NLP plays a major role.

Following are some of the real-world applications in which NLP is used: