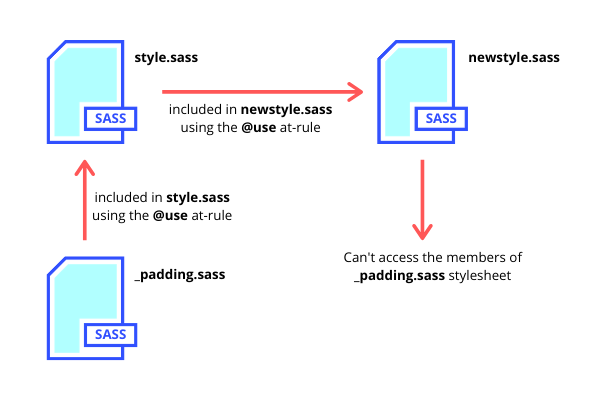 The syntax of the @forward at-rule is same as that of @use at-rule.

If we use the @forward at-rule, we can skip using the @use at-rule. We can also have both @use and @forward at-rule for including a single stylesheet as the SASS engine will only include it once.

Let's take an example and see how this is used in SASS:

This will be compiled into the following CSS:

To check the difference between @forward and @use at-rule, try changing the @forward "src/list" statement in the main.sass file to @use "src/list" and then compile the CSS, you will see that the styling rules will not be imported.

As we know that when a stylesheet is included into another stylesheet, SASS creates a namespace which is the filename of the stylesheet, we have already covered this in details in the SASS @use at-rule. Now, there are few questions that comes to my mind:

But, we can add a prefix to all the member names of the module getting imported using the @forward at-rule. Following is the syntax for adding a prefix:

Let's modify the example above to use a prefix while importing the _list.sass file.

This will add the prefix list- to the names of all the members of the stylesheet _list.sass (all mixins, variables, functions etc).

This will be compiled into the following CSS:

While importing a module(stylesheet) into another stylesheet, we can control what all members should be further available in consecutive imports using the hide and show keywords followed by member names in the @forward at-rule statement.

Following is the syntax for it:

Below we have a stylesheet _button.sass,

To hide some mixin and variable from the above stylesheet,

So, that's it for SASS @forward at-rule.