All the above three annotations can be replaced by @SpringBootApplication.

The SpringApplication class provides a static method run(class <T>,String[]) which returns the reference of the ApplicationContext. It manages all the beans and can be displayed as follows:

In the above figure, we can observe that the beans created are related to auto-configuration. The above screenshot highlights the beans related to H2, hateoas dependencies which were selected during the project setup.

Generating the Build from the Project:

Let us run the JAR file from the file system. JAR file will be placed under target folder and it needs to be copied to some folder on your system. Let us create two profiles for testing and production environments.

1. Create a file named application-test.properties and place the below property and save the file.

2. Create another file named application-prod.properties and place the below property and save the file.

We may choose the required properties while launching the application. Before that, let us understand about maven. To get the build of the project (either in JAR or WAR format), we need to run the command mvn install, however in the IDE we have an option for that. Both the above files are created under src/main/resources. 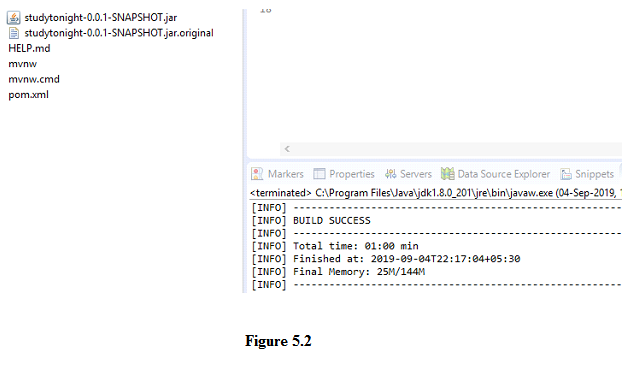 In the above figure, we see that the build was successful and the JAR file is generated. It is found under the target folder of the project.

Running the build and choosing the configuration:

We will follow some steps to run the JAR generated above from the file system, they are:

1. Copy the JAR generated above from the target folder to any of the folder and open CMD in that folder.

2. Run the below command in CMD java -jar studytonight-0.0.1-SNAPSHOT.jar

3. We have two more profiles which are testing and production environments. To select the specific profile, we need to provide the program arguments which will be applied. Remember the static method run(class<T>, String []) in the class SpringApplication.

5. The same reference should be passed to the static run method in SpringApplication so, this is how the program arguments can be used to select the configuration at the time of application launch.

6. Spring provides a command spring.profiles.active which is passed as the program argument.

7. The above command was ran with spring.profiles.active where the test environment profile configuration was selected and the property set for the server to run was 9000 which can be seen in the below figure

8. Similarly, run the below command to apply the production environment properties

Instead of the properties file, we can also use the YML file to specify the properties. As an example, create a file application.yml under src/main/resources and add the below properties as it is in the file with the same indentations.

Now, specify the profile Linux while running the JAR after building another build.

The above command runs the application on port 1000 as it was mentioned in application.yml.