A Queue is defined by its property of FIFO, which means First in First Out, i.e the element which is added first is taken out first. This behaviour defines a queue, whereas data is actually stored in an array or a list in the background.

In our previous tutorial, we used a simple array to store the data elements, but in this tutorial we will be using Stack data structure for storing the data.

While implementing a queue data structure using stacks, we will have to consider the natural behaviour of stack too, which is First in Last Out.

For performing enqueue we require only one stack as we can directly push data onto the stack, but to perform dequeue we will require two Stacks, because we need to follow queue's FIFO property and if we directly pop any data element out of Stack, it will follow LIFO approach(Last in First Out).

In all we will require two Stacks to implement a queue, we will call them S1 and S2.


In the code above, we have simply defined a class Queue, with two variables S1 and S2 of type Stack.

We know that, Stack is a data structure, in which data can be added using push() method and data can be removed using pop() method.

You can find the code for Stack class in the Stack data structure tutorial.

To implement a queue, we can follow two approaches:

In this approach, we make sure that the oldest element added to the queue stays at the top of the stack, the second oldest below it and so on.

To achieve this, we will need two stacks. Following steps will be involved while enqueuing a new element to the queue.

NOTE: First stack(S1) is the main stack being used to store the data, while the second stack(S2) is to assist and store data temporarily during various operations.

This makes removing an element from the queue very simple, all we have to do is call the pop() method for stack S1.

In this approach, we insert a new element onto the stack S1 simply by calling the push() function, but doing so will will push our first element towards the bottom of the stack, as we insert more elements to the stack.

But we want the first element to be removed first. Hence in the dequeue operation, we will have to use the second stack S2.

We will have to follow the following steps for dequeue operation:

NOTE: We will be implementing the second approach, where we will make the dequeue() method costly.

As our Queue has a Stack for data storage instead of arrays, hence we will be adding data to Stack, which can be done using the push() method, therefore enqueue() method will look like:

That's it, new data element is enqueued and stored in our queue.

When we say remove data from Queue, it always means taking out the element which was inserted first into the queue, then second and so on, as we have to follow the FIFO approach.

But if we simply perform S1.pop() in our dequeue method, then it will remove the Last element inserted into the queue first. So what to do now? 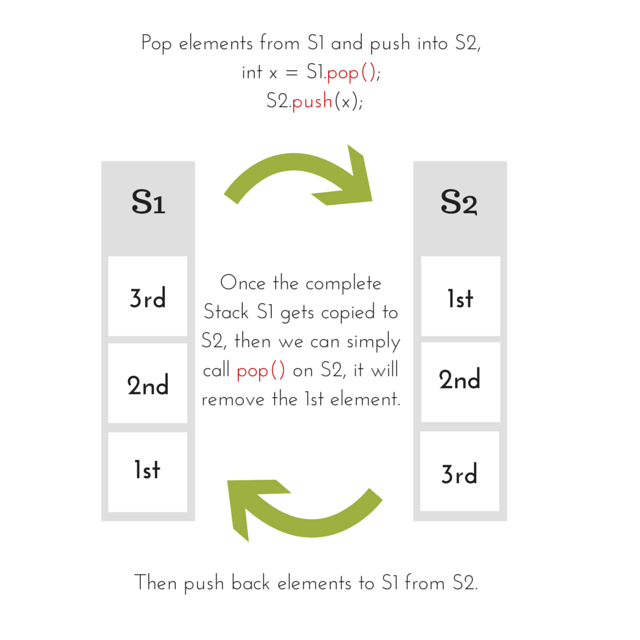 Now that we know the implementation of enqueue() and dequeue() operations, let's write a complete program to implement a queue using stacks.

We will not follow the traditional approach of using pointers, instead we will define proper classes, just like we did in the Stack tutorial.