Docker provides a desktop application that is super easy to install and run on a Windows operating system. As we know that Docker containers are based on Linux Kernel and all the containers running in docker utilizes the same OS Kernel then how does the docker setup work in a Windows environment?

For Windows versions before Windows 10, we will have to follow the legacy approach for docker installation which requires installing the docker toolbox on Windows. You can find all different versions of the Docker toolbox from its official Github repository. The docker toolbox includes an Oracle VM Virtualbox(along with other required components) with it which it uses to set up Linux Kernels required for containers.

So let's first install Docker Desktop application for Windows 10 step by step and then we will cover more about setting up the docker toolbox for older windows versions.

For Docker desktop application, you should have 64-bit Windows 10 and the Hyper-V and Containers Windows features must be enabled.

As far as RAM is concerned a minimum of 4 GB RAM is required. Do not worry about enabling the Windows Hyper-V feature, the docker desktop application will take care of this during installation.

Note: When Hyper-V is enabled on Windows, any configured VirtualBox on your system will stop working.

Once you have successfully installed the docker desktop application, you will have to start the application as it will not start automatically after installation.

Go to the start menu, and search for Docker, click on the Docker Desktop. 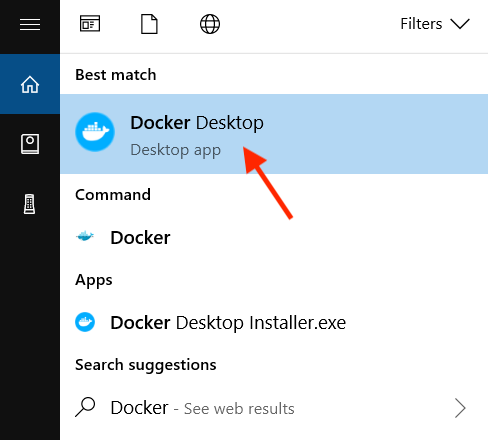 You will see a moving whale icon appear in your taskbar, which means the docker desktop application is getting started. Wait for this whale icon to stop moving and become steady, which means docker has started.

Once the docker desktop application starts, you can use the windows command prompt to run docker commands.

To verify the installation, run the following command to check the version of the docker installed:

You should see the version number of docker as shown in the output above.

As mentioned in the beginning of this tutorial, if you use Windows 7 or older version, then you will have to follow a different approach for installing docker on your Windows machine.

The docker toolbox comes packaged with the following:

We would strongly recommend using the latest desktop application available for Windows 10 for the best experience while learning docker.