Static is a keyword in Java which is used to declare static stuffs. It can be used to create variable, method block or a class.

Note: Static variable is used to represent common property of a class. It saves memory.

Suppose there are 100 employee in a company. All employee have its unique name and employee id but company name will be same all 100 employee. Here company name is the common property. So if you create a class to store employee detail, then declare company_name field as static

Below we have a simple class with one static variable, see the example.

We can understand it using the below image that shows different memory areas used by the program and how static variable is shared among the objects of the class. 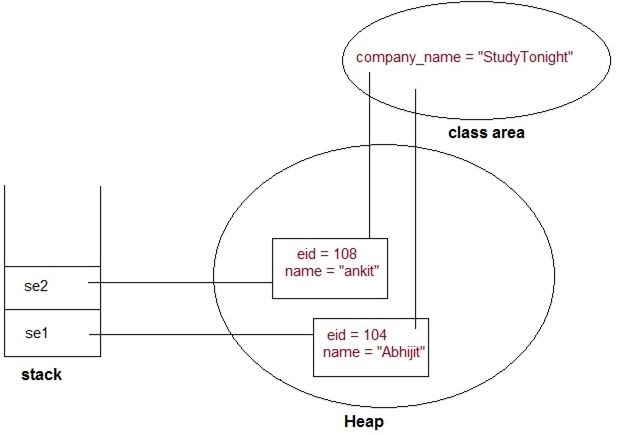 Let's take an example and understand the difference.

It executes when the class is loaded in the memory. A class can have multiple Static blocks, which will execute in the same sequence in which they are programmed.

Lets see an example in which we declared a static block to initialize the static variable.

Non-static (instance) variable cannot be referenced from a static context.

Let's take an example of accessing non-static variable from a static context.

Why main() method is static in java?