Creating your First Project in Maven

In the earlier lessons, we have seen about the maven project architecture and the different configurations involved for a project. Now, we will understand how a sample Java project can be created using Maven. Maven can also be used to build and manage projects developed using C#, Ruby, Scala and few other languages. But, this is primarily used for java projects, so we will be using Java for examples. Also, we will see how the project is structured when created using maven.

Maven uses archetype to create any project. Archetype is nothing but the tool provided by the maven to create a project. It is also defined as 'an organizational pattern from which all other things of the similar kind are made'.

Using archetypes provides an easy and instrumental way to create projects to the developers, where the best practices are employed as per the standards defined at the organization level. Also, archetypes enables the developers to quickly create a project and start running the same within a matter of commands.

So, let us create one simple project in maven. Open the command prompt and navigate to the workspace folder in your local machine (E.g. D:\Java\workspace). You can create the Workspace folder wherever you want on your PC or use your Workspace, if already created. Then type the below maven command(its a single line command) and press enter.

This maven command will create a Java project with the below details: The above command instructs the maven to create a project with maven-archetype-quickstart template.

If you navigate to the folder D:\Java\workspace, a new project named JavaSamples will be created including all the base structure of a java project as well as shown below : 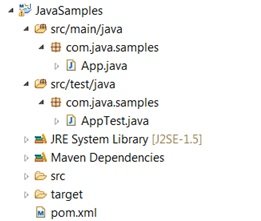 To see the following directory structure you need to Create a New Java Project on your Eclipse IDE, and import the following project there.

Table below will describe the main directories that are created as a part of the project.

Under the folder D:\Java\workspace\JavaSamples\src\main\java\com\java\samples a sample java file called App.java will be created by default which will be having one print statement.


And under the folder D:\Java\workspace\JavaSamples\src\test\java\com\java\samples a sample java test class (JUnit) will be created AppTest.java

The test class code which is marked as Rigorous Test is the code which is automatically generated when a sample java project is created using maven. This method will just return TRUE and the test will be passed after the run. This method is just included as one sample test. You can modify this method or add your own test methods.

Also, the TestCase class is an abstract class from the Junit API which is used here in the sample project. This will also be included by default automatically when a sample maven java project is created (check the dependency entry for junit in the pom.xml). The TestCase class defines the fixtures to run mutilple tests in a class.

Developers are required to add their files as described in the above mentioned table. They are very much free to add any new packages as well as required during the project development. The above said folder structure is just created as per the archetype plugin defined.

There are 2 major versions made available for any maven project: