In this tutorial we will learn how to implement face detection using Haar cascade pre-trained model in OpenCV using Python. The code that we have used in this tutorial is available in the Github repository - https://github.com/shekharpandey89/face_detection_using_haar_cascade

with the following directory structure:

Download the code from the GitHub link and unzip it. You will get three files with two directories and one python script. In which cascades directory has haarcascade_frontalface_deafult.xml pre-trained model and images folder has our test.png image.

In this blog, we are going to see how face detection is done in the image because I already have written one blog to detect face features using Dlib's-68 points.

Face detection is a hot topic in computer vision used in the camera to make them detect faces and this also has a wide variety of use cases like in home security systems for surveillance, touchless entry for employees in office, monitoring people at airports, etc.

The Viola-Jones algorithm (also known as Haar cascades) is the most common algorithm in the computer vision field used for face detection on the image. The Viola-Jones algo is used not only to detect faces on images but also we can train the model to detect different objects like cars, buildings, kitchen utensils, fruits, etc.

The image to be used is divided into different kinds of sub-windows and multiple Haar-like features to compute it at different scales and positions for each sub-window. The main features are selected using the Adaboost algorithm. Then each sub-window is checked for the presence or absence of face using a cascade of classifiers.

The detection algorithm uses a cascade of classifiers which use Haar-like features. Thus, it is also called the Haar Cascades based detector. 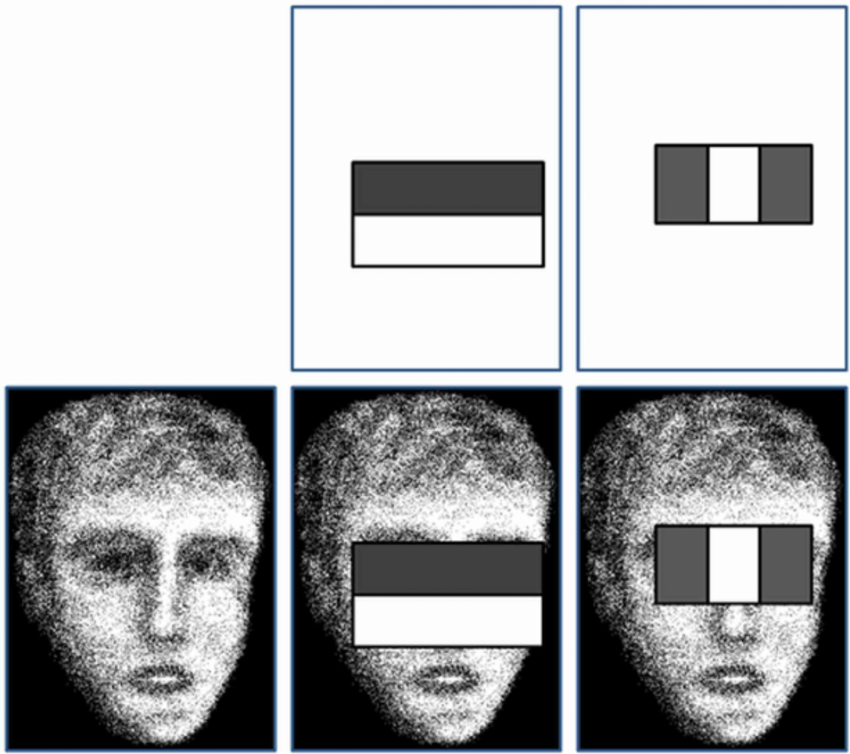 In the figure shown above, when we calculate the second image features, it will give more features because the bridge is lighter than the nearby area. But if the same features, we keep on the head of the face, we will get fewer features. In the third image, we also get more features as it can detect the eye region since the eye region is darker as compared to the region below it.

It should be noted that only a single feature is not capable of detecting faces with high accuracy. But, when many such features vote for the presence or absence of a face, the detection becomes very accurate and robust.

These features have actual real importance in the context of face detection:

Therefore from the above given five rectangles along with the corresponding difference of sums, we are able to get the features which can classify the face. To detect which features belong to face from the available number of features we use the AdaBoost algorithm to select which ones correspond to facial regions of an image.

As we can imagine, using the above rectangle fixed sliding window on the image across every (x, y) coordinate of an image, followed by computing all those features using Haar to classify the face features. This whole process can be computationally expensive.

To overcome this, Viola and Jones introduced cascades concept. At each stop along the sliding window path, the window must pass a series of tests where each subsequent test is more computationally expensive than the previous one. If any of the test fails, the window is automatically discarded.

The Haar cascade approach is good as they are very fast like Haar features and also they choose the best features of the face using the AdaBoost algorithm.

Most probably we want a solution which can detect faces on images regardless of the image size and scale and using Haar cascade we are getting the same. And finally the Viola-Jones algorithm is able to detect objects in real-time.

Below is the code to detect a face on the image.

On code line 15 and 16, we simply load our image and convert it to greyscale(color of the image has no affect on face detection).

On code line 22 to 30, we are simply getting all the faces on the image with a list of bounding boxes or start and end coordinates (x, y). Now we can see what is the meaning of each parameter here.

Code line 35, loops over all the detected face and creates a rectangle box.

Code line 39, finally we show our image on the screen. 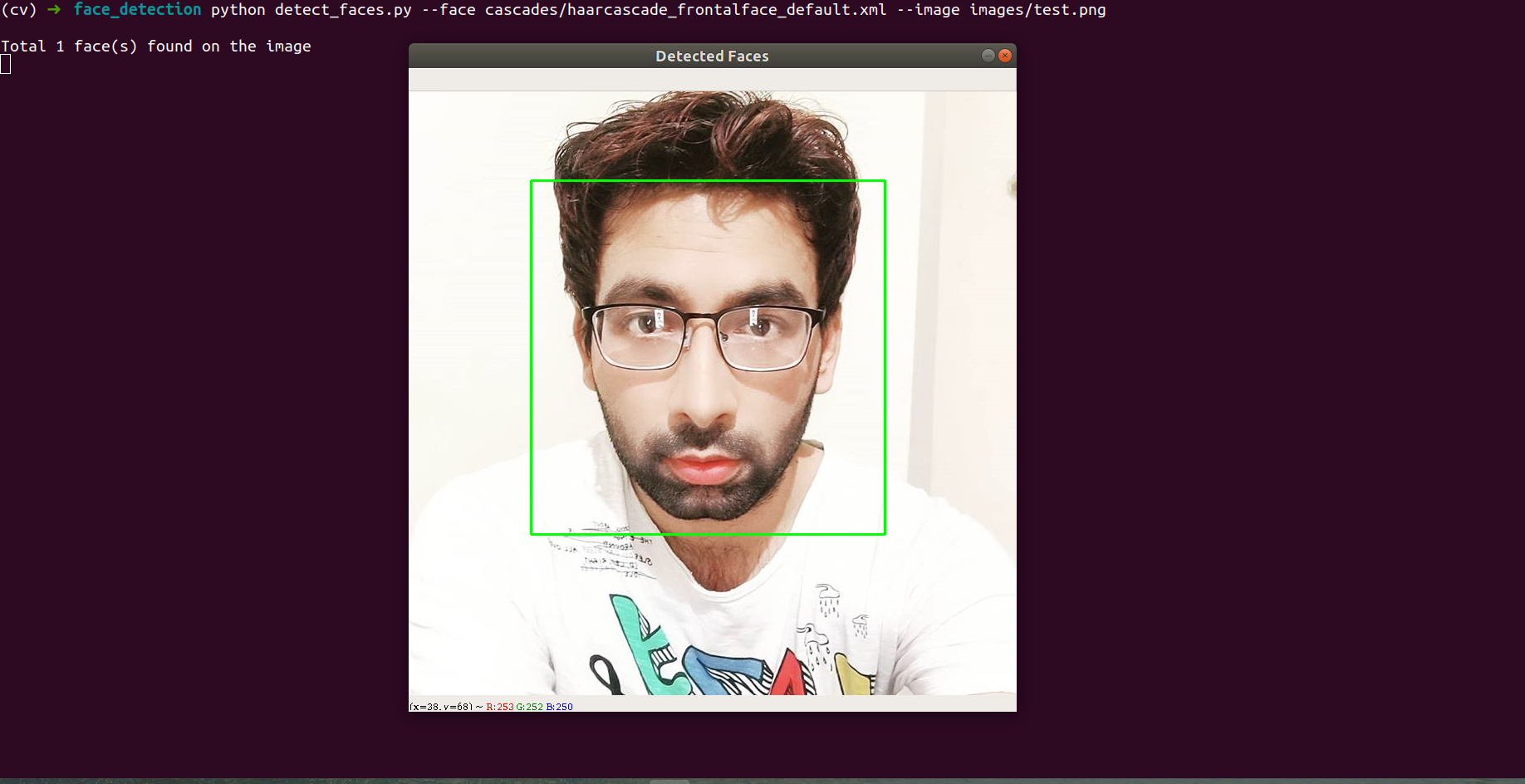 The above code run on the OpenCV 3.0+ version. But you can also run the above code in the OpenCV version 2.4 which is already mention in the code. For that, you have to uncomment the below line:

Here in this tutorial, we learned how the Viola-Jones/Haar cascade algorithm work to detect faces on the image. We learn how we can use the OpenCV pre-trained model for our purpose. The Haar cascade is quite fast but also it has two shortcomings which are given below: