How to Install openCV on Ubuntu 18.04 or above

To check Python 3 version(and also if it is pre-installed or not) on Ubuntu we have to use the following command:

Figure 1: The above screenshot shows the Python3 version

So let's start the installation.

Step 1: Installation of the OpenCV dependency

First, we will start by updating our operating system and making sure all the OpenCV dependencies are installed.

Open your Ubuntu laptop or Desktop and then start the terminal either click on the show Application option and then search terminal or else press Ctrl + Alt + T from your keyboard.

We are going to update the operating system using the following commands:

Now we are going to install some tools which will help us while installing OpenCV on Ubuntu.

Now we are going to install some image tools and video libraries (input and output). These libraries help us to read images from the local drive along with the video.

Now we have to install the libjasper-dev.

If you are facing any type of error during the installation of libjasper-dev library, follow the below steps. If you are not getting any error while installing the above library, then skip this step:

We continue with installing other libraries:

Now we are going to install the GTK library.

Now we are going to install the optimization methods library for the OpenCV using the following commands:

Now we are going to install header files of the Python3 using the below command:

And with this, we have completed step 1.

Now we are going to download OpenCV 4.3.0 and openCV_contrib 4.3.0. With the help of the opencv_contrib, we will get more functions and modules. So while installing OpenCV, we can install both OpenCV and opencv_contrib at once.

To download, the OpenCV and opencv_contrib use the following command. We are installing OpenCV 4.3.0 but you can install any OpenCV version which exists on the OpenCV website. While writing this blog, the current OpenCV version is 4.3.0

Note: OpenCV and OpenCV_Contrib both versions should be the same.

Now in the next step, we have to unzip both OpenCV and OpenCV_Contrib using the following commands. To do this, navigate to that folder or location where you downloaded both zip files and then run the below commands.

After unzipping the files, you will get your file name with the version which you downloaded. So we can rename the files. This step is optional and if you do not rename, then be careful while writing the below commands ahead because we will be using the rename file name.

Now we will use the pip for further installation. To configure pip from the old version to the new version using the following commands:

For example, you are working on a project and you are using TensorFlow latest version on your system but to run that project you need Tensorflow version 2.0 or older. So if you remove the latest version then that might affect your other projects. So the best thing is that you create a virtual environment and install all the requirements libraries on that virtual environment and execute your project without affects the other projects.

To create a virtual environment there are two methods in python:

Any above methods you can choose, but the latest method is virtualenv, so I am also going to use this method here.

Now we have to update the path of the virtualenv to bash. So for that, we have to use the following steps:

We can also add these paths using the below method. Choose either the above or below the method for this step.

Now after done the above steps using any above methods, we have to save that file back to bash using the below command:

Now we are going to create a virtual environment along with python for my project. To create the environment we use the following command:

Figure 2: To create a virtual environment

Figure 2: We can see that the virtual environment cv is created and showing active. So the screen which we have seen that is a virtual environment screen and here we can install all packages according to our project requirements either latest or old versions and it will not affect the main system packages or libraries which we already installed.

Numpy is required to work with OpenCV along with Python. As our virtual environment is already active, so we just need to run the below command: 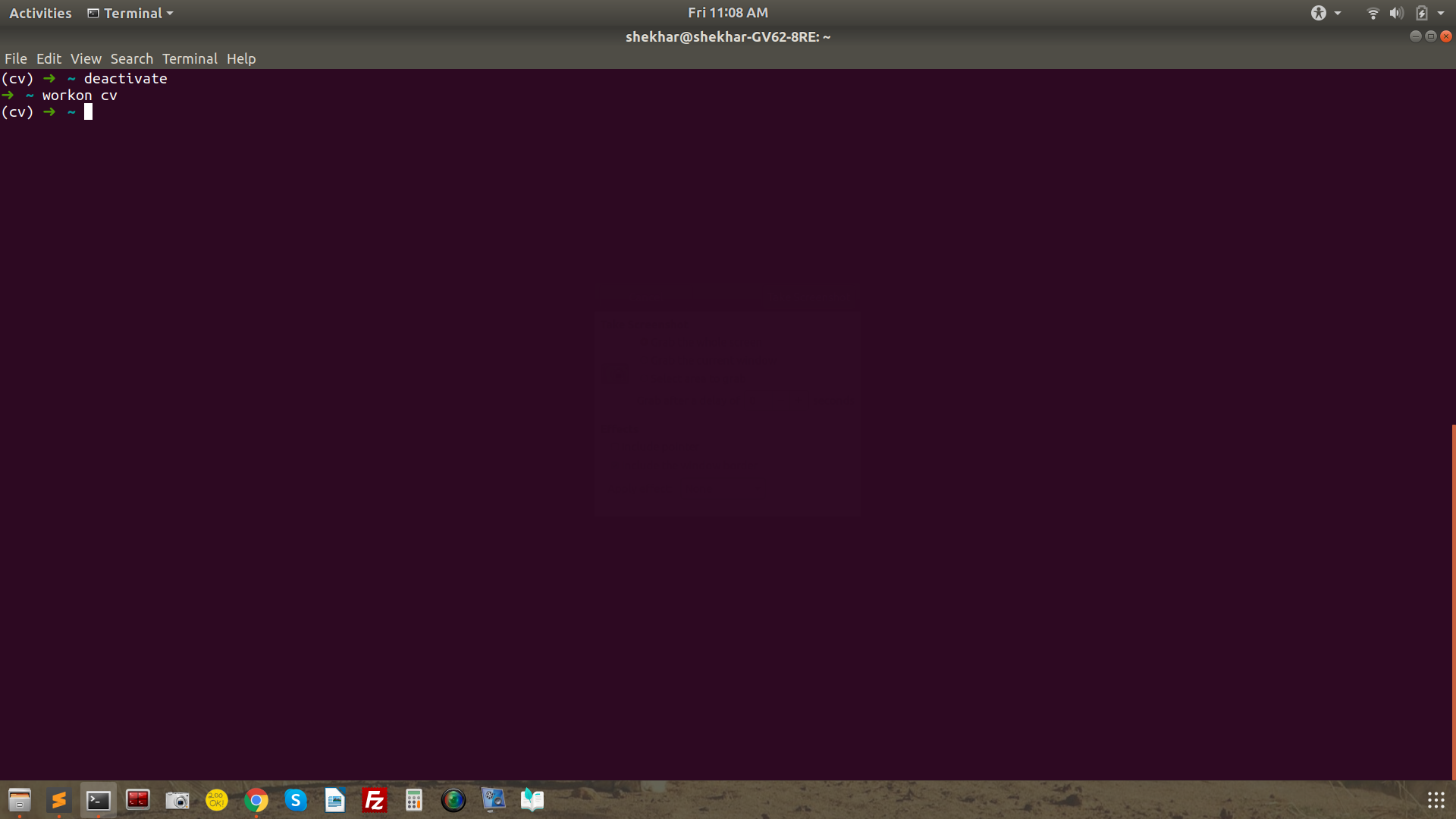 Now finally we are going to configure the OpenCV with Python on Ubuntu machine using CMake. 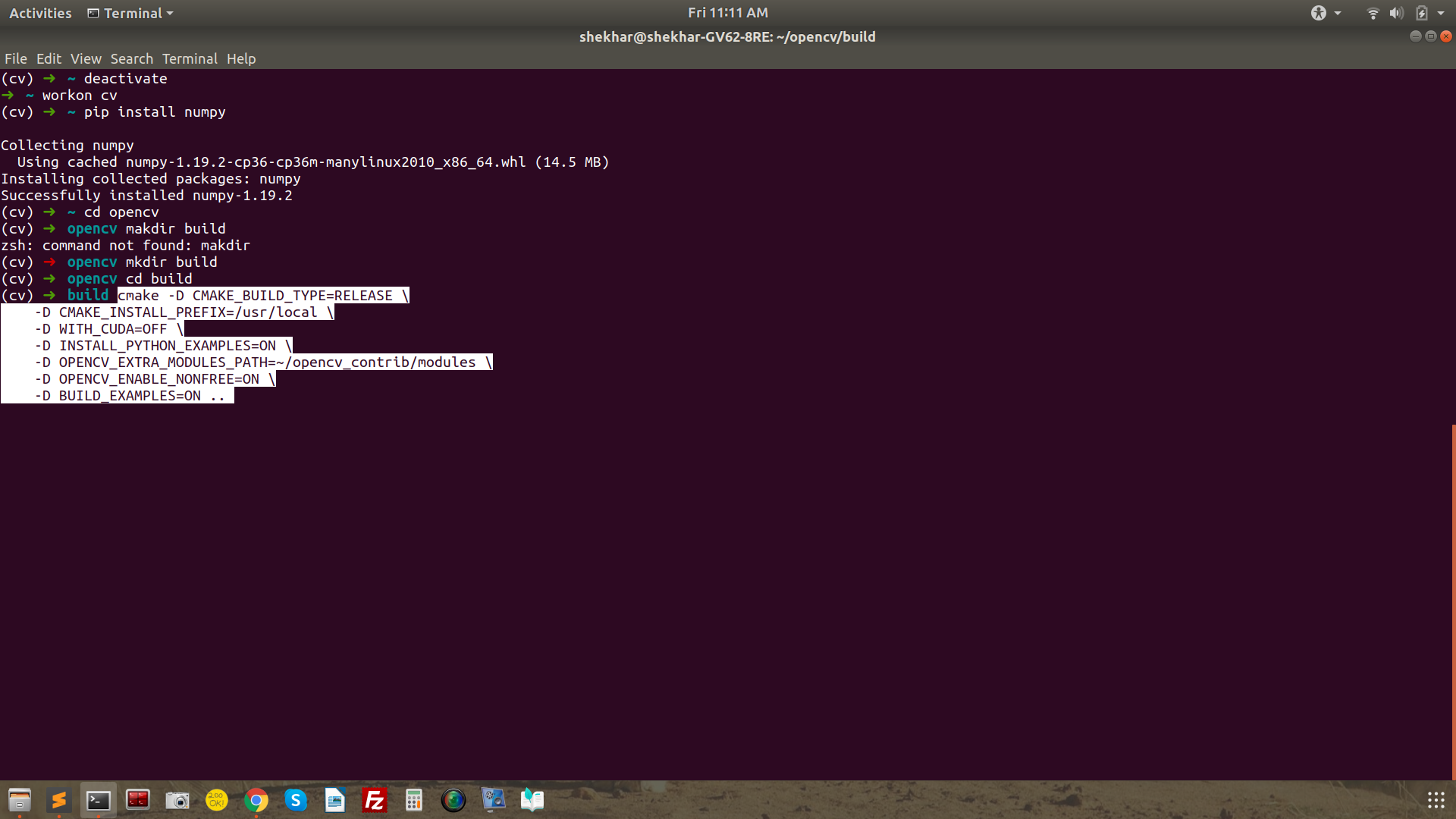 Make sure that you must have mentioned the flag value of OPENCV_ENABLE_NONFREE=ON because all the patented algorithms like we discuss before like SURF and SIFT come inside of this option and if we keep this flag value OFF then we won't be able to access those algorithms.

Also, be careful to look at the OpenCV build output as shown in the below output image. If you see carefully, then you will see there is a virtual environment cv mentioned and all python libraries installed inside of this environment (your environment name will be different, if you choose a different name). Also, look carefully at the output screen of the build, you did not get any errors or compile go fail. 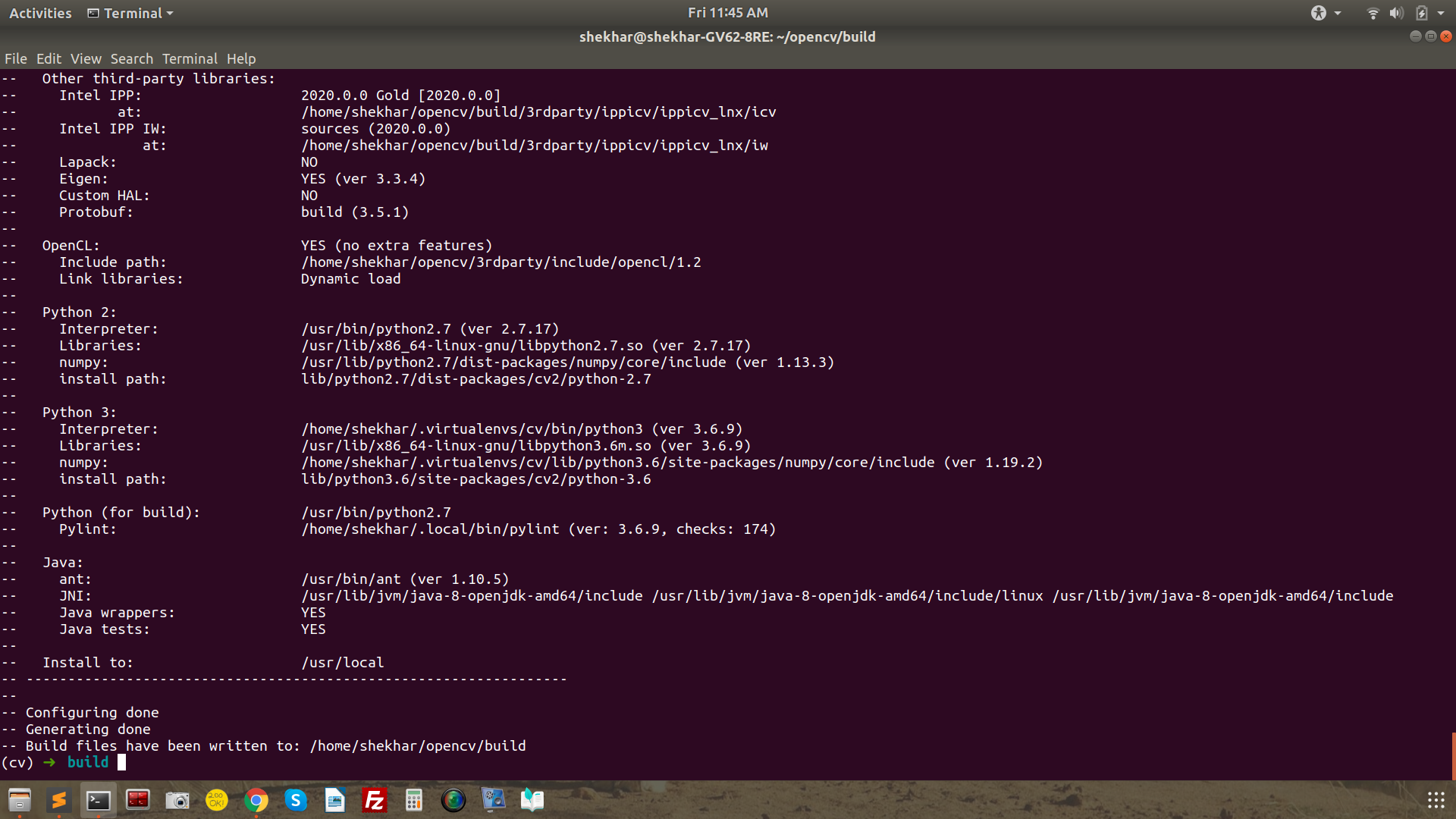 Figure 5: After successfully configuring the OpenCV with Python result.

If you take notice of the final output screen you will see that the Python3 only show the details of the libraries or installation path. This is because of the reason we build the OpenCV along with the Python3 only.

Also, if we scroll the output to some 30 to 40 lines above, then we can see an entry non-free algorithm included during installation. This means we have set up the patent algorithms too in our OpenCV installation. 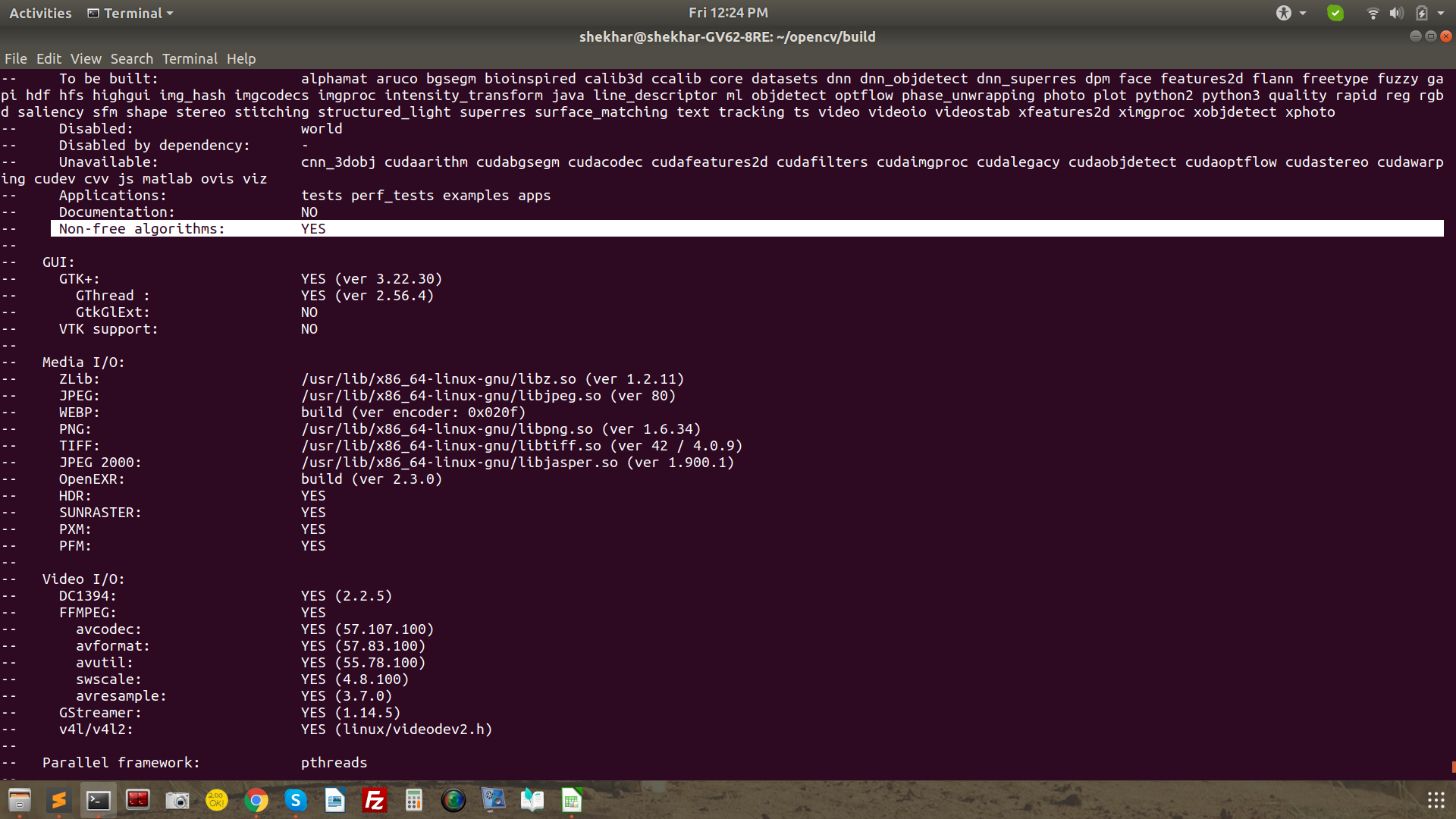 Caution: If you find any stdlib.h error like no such file or directory found then we have to add one more command during CMake which is:

-D ENABLE_PRECOMPILED_HEADERS=OFF. After adding this line, delete the build directory from the OpenCV and recreate the build and repeat the process. Now you will not get any error.

Now we are going to compile the OpenCV with Python on Ubuntu 18.04 machine.

The command of compilation for OpenCV is: 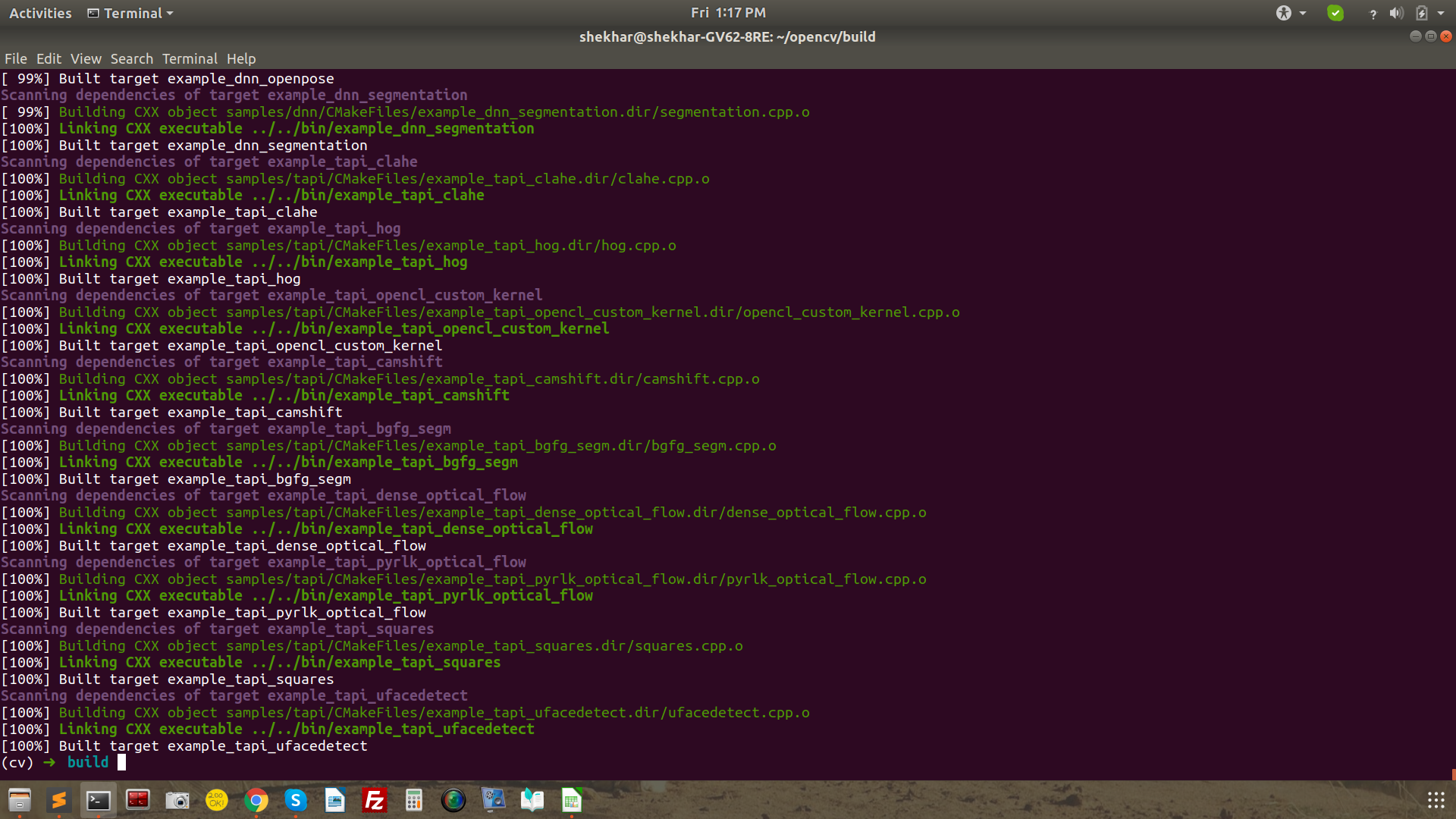 Figure 7: We compile the OpenCV with Python 3 on Ubuntu 18.04 and now after a successful build, we will get results like the above screenshot.

The value of 4 is the number of cores. You can adjust the numeral value depending upon available cores in your system.

If you don't want to set the number of cores to be used, use the simple make command:

Now after successful compilation, we can install OpenCV using the following commands: 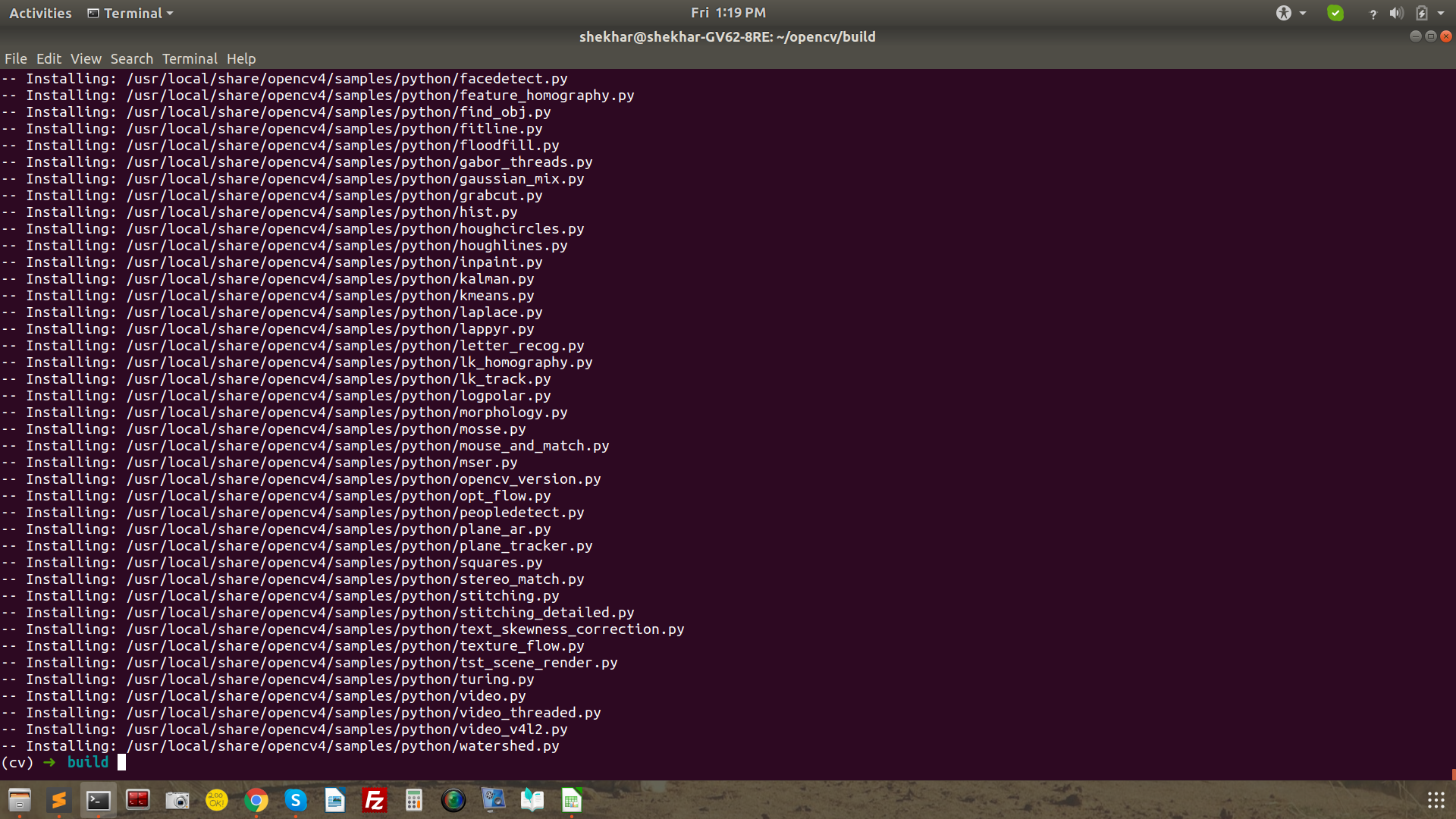 Figure 8: After the successful compile, we install the OpenCV and you will see results like above.

Here in this step, we are going to bind the Python3 with the OpenCV. In this step, you must be careful because most people will get an error in this step..

So you must check either your Python OpenCV must reside in this location. We can check it using the below command:

And you will see some results as shown in the screenshot of my system. 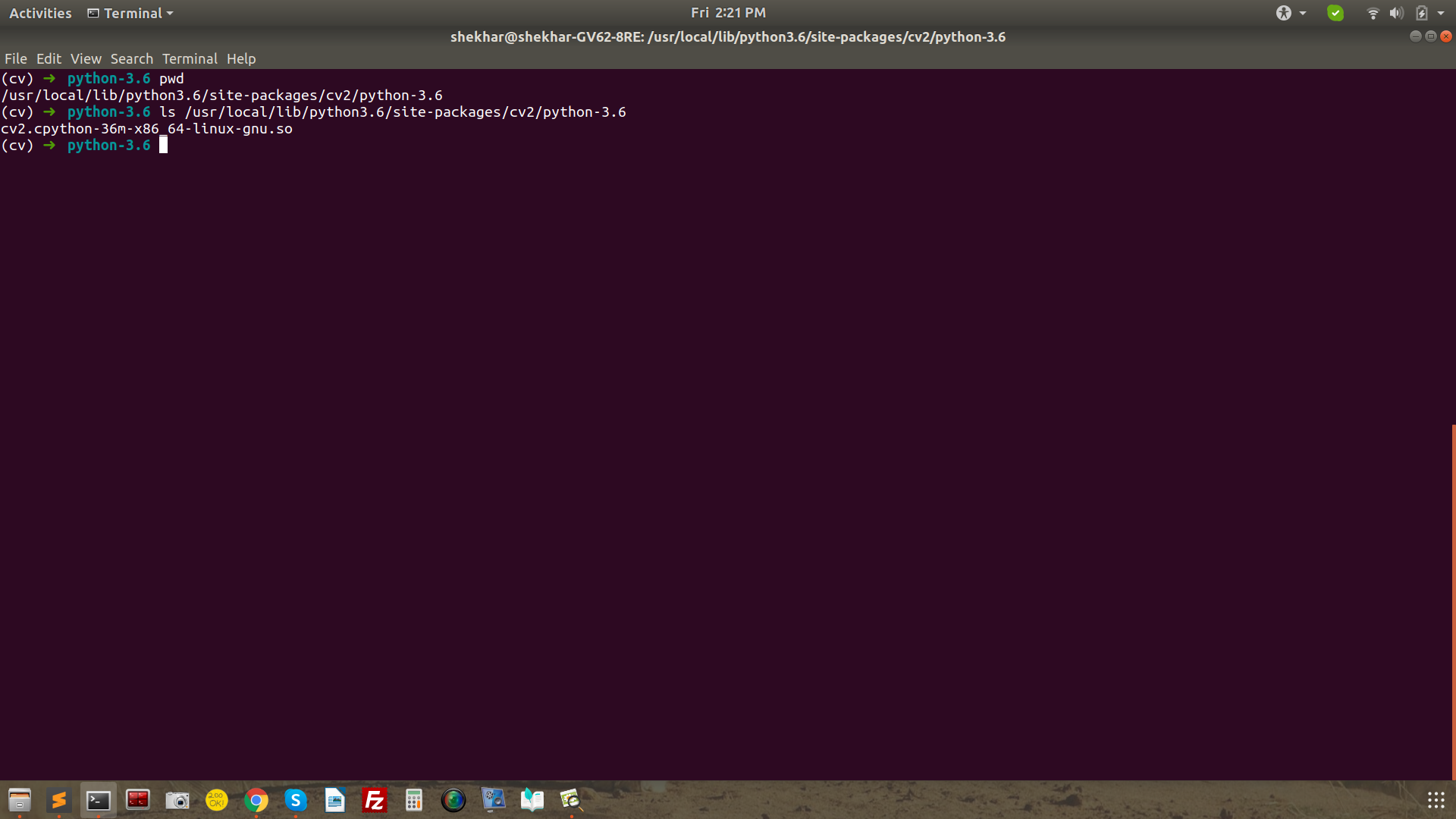 Figure 9: We migrate to the location of cv2 which inside of the site-packages to check whether OpenCV is successfully installed or not.

After that, we have to navigate to that location (above) and rename the above compile OpenCV with some other small name as shown below:

Now type ls and see the OpenCV python compile file which looks something like this:

If you have reached here, then you are going good and rename the file like below: 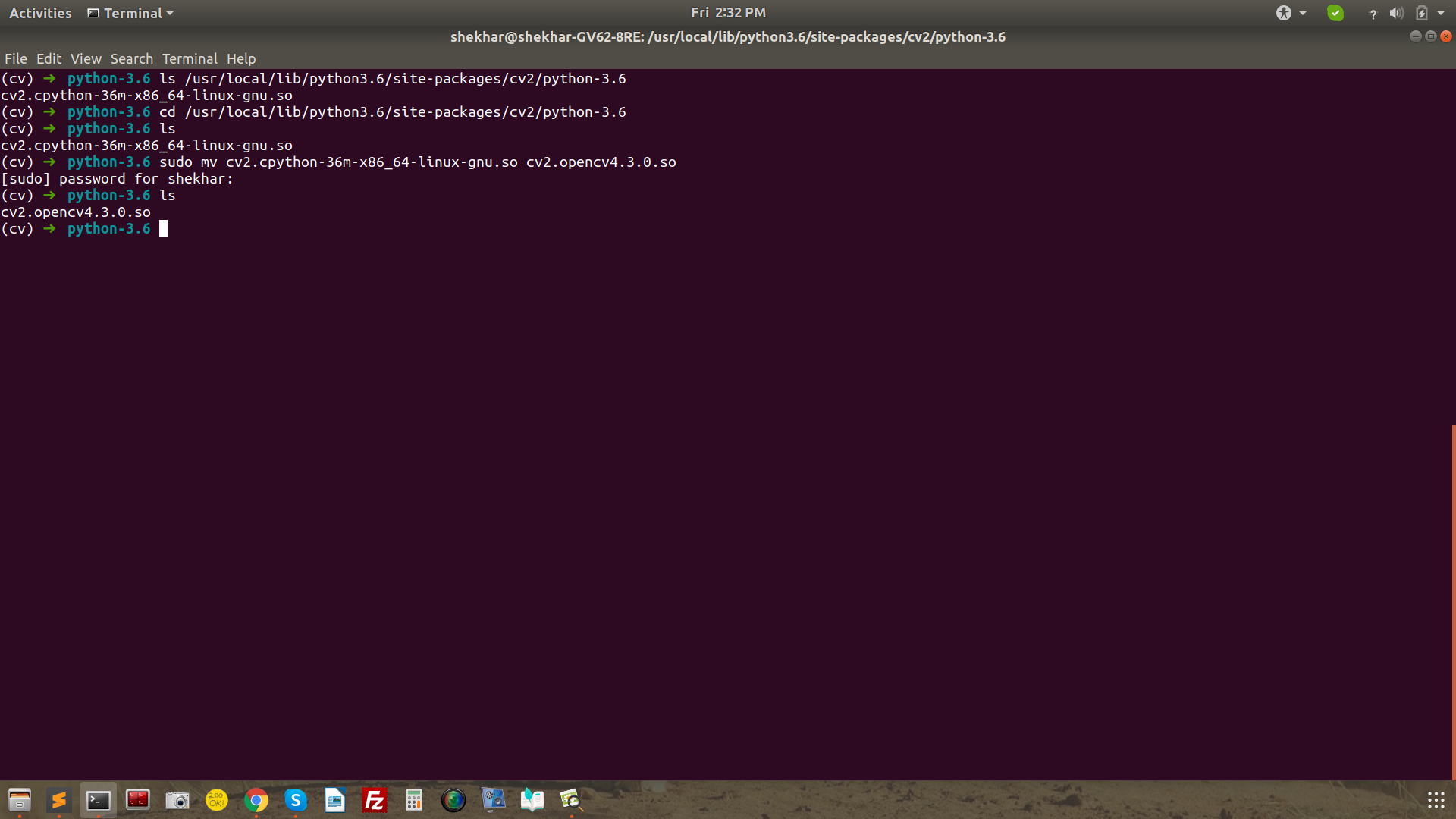 Caution: If you have installed another version of OpenCV in your system then you must choose a different name so that it will not conflict with the already existing OpenCV version.

For example, if I have already installed OpenCV in my system and the first time I did rename with cv2.so. So while installing the next time with another version of OpenCV, I will choose some different name like cv2.opencv3.4.4.so

Now after renaming it, we do a system link of our OpenCV (cv2.so) to the virtual environment cv using the following command:

If you are getting an error during run the above command like Permission denied, then run the command with sudo as shown below in the screenshot below:

If you did not get any error then it means your OpenCV is bound with the virtualenv, which we created. 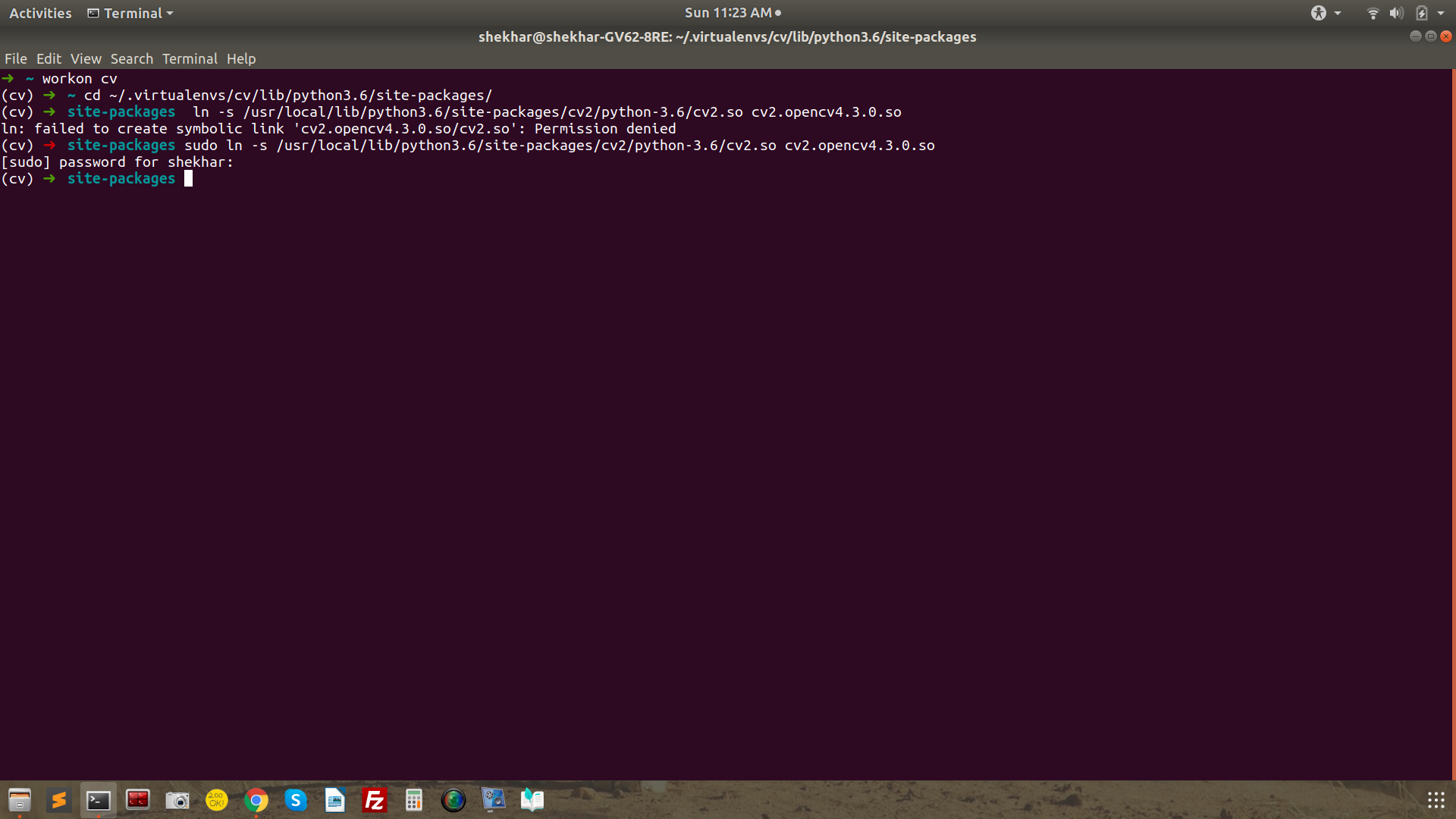 Now that we have completed all steps of installation of OpenCV with Python 3.0+ on Ubuntu machine. In this step, we are going to test our installation. 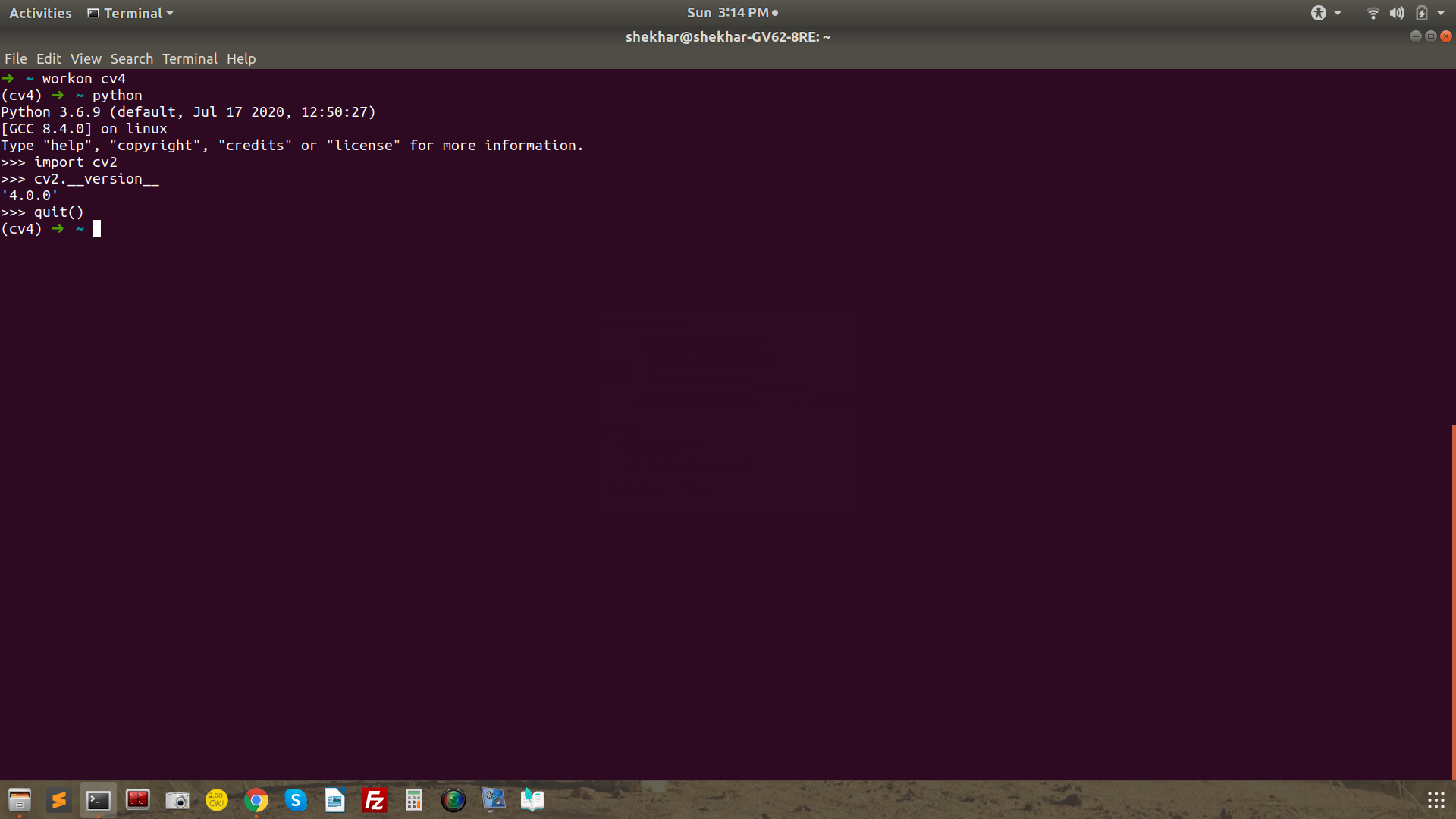 Figure 12: To verify the proper installation of OpenCV with Python 3.0+ on Ubuntu machine.

As in the above screenshot, I run a different virtualenv as it was already installed on my system. So follow the same above command to test your OpenCV installation. Now after that, we can delete the OpenCV and OpenCV_Contrib folders along with their zip files.

We have successfully installed the OpenCV with Python 3.0+ on Ubuntu machine. Like this we can install different versions of OpenCV on the same machine.

Now in the next blog, we will install the OpenCV for C++.

RECENT POSTS
Lists in Python
Why Data Structures and Algorithms are important
Which data structure is best?
How Data Structures are used in Operating System
Top 10 Android books for App Development to Read in 2022
10 Best CSS Books for Beginners & Advanced to Read [2022]