The String is a type in python language just like integer, float, boolean, etc. Data surrounded by single quotes or double quotes are said to be a string. A string is also known as a sequence of characters.

In Python, we can count the occurrences of a substring from a given string using three different methods. The mentioned codes will return the count of how many times a substring is present in a string. 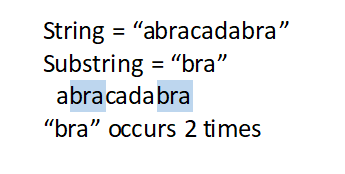 This is a simple solution to match characters of a substring one by one and we increment the counter by 1 when we get the complete match for the substring. This program is generally helpful for those who are looking for an algorithm without the use of any built-in functions.

This solution is based on KMP(Knuth Morris Pratt) algorithm. The basic idea behind this algorithm is that it detects the mismatched pattern or substring instead of the matched pattern. lps[] array is used to skip the characters while matching. The following is a self-explanatory code. We will look into this algorithm in detail in another article.

In this example, we use built-in count() function to count the occurrences of the substring in the given string. It takes substring as an argument. Also, you can provide substring, start and stop arguments to find a substring within a range.