Search and Replace a Line in a File in Python

In this article, we will learn to search and replace the contents of a file in Python. We will use some built-in functions and some custom codes as well. We will replace lines within a file using mentioned ways.

Python provides multiple built-in functions to perform file handling operations. Instead of creating a new modified file, we will search a line from a file and replace it with some other line in the same file. This modifies the file with new lines of data. This will replace all the matching lines within a file and decreases the overhead of changing each line. Let us discuss some of the mentioned ways to search and replace lines in a file in Python.

We will use the below review.text file to modify the contents.

Python FileInput is a useful feature of Python for performing various file-related operations. For using FileInput, fileinput module is imported. It is great for throwaway scripts. It is also used to replace the contents within a file. It performs searching, editing, and replacing in a text file. It does not create any new files or overheads.

backup - The backup is an extension for the backup file created before editing.

Example: Replace only the First Line of a File using FileInput

The below example takes the review.txt file and changes its first line with the new line.

Example: Search any Line of a File and Replace it using FileInput

The below example takes the review.txt file and changes a particular line with the new line within the file. It searches for the line and replaces it. 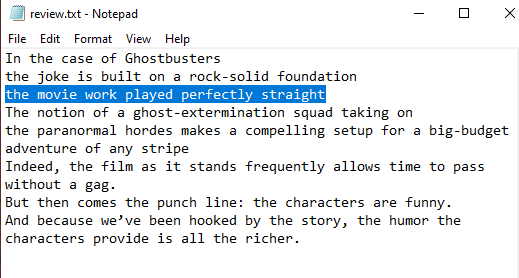 In this article, we learned to search and replace a line in a file by using several built-in functions such as replace(), and FileInput module. We used some custom code as well. We saw outputs too to differentiate between the examples. Therefore, to search and replace a line in Python user can load the entire file and then replace the contents in the same file instead of creating a new file and then overwrite the file.