Before moving on, you should introduce yourself to Javascript Promise and Methods to handle the states of Promise.

The methods implemented with the Promise class in ES6 or ES2015 are all(), reject, resolve, etc. While the allSettled() method is introduced in ECMAScript 2020.

The Promise.allSettled() method accepts a list of promises and returns a new promise which resolves after all the input promises have settled, either resolved or rejected.

In simple words, we can say that this function can be used to monitor and report the status of a list of promises.

In comparison, the Promise returned by Promise.all() is used when the tasks are dependent on each other.

Here is how we can use this function,

When we pass an empty iterable as an argument, Promise.allSettled() method returns a Promise object which has already been resolved as an empty array.

The value (or reason) attribute determines whether each Promise was fulfilled (or rejected).

In the given example we have used the Promise.allSettled() method to wait for all the input promises to settle.

As we can see in the output image, the first Promise p1 fulfilled the value 10 after 1 second, and the promise p2 was rejected to a reason 20 after 2 seconds. 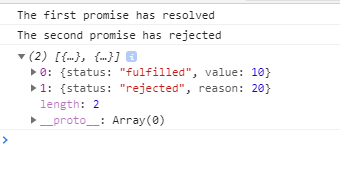 We have learned about the Promise.allSettled() method introduced in ECMAScript 2020. This method accepts a list of promises and returns a new promise, that resolves once every input Promise has settled, either rejected or fulfilled.