Here we have listed all the major features of C language to give you more reasons to learn C language.

C is a widely used language that provides a lot of inbuilt functions and it is a general-purpose, procedural language that supports structured programming. It was originally developed at AT and T's Bell Laboratories of the USA in 1972. C was designed and written by Dennis Ritchie.

C was an offspring of Basic Cambridge Programming Language(BCPL) called B. It is many times faster than BASIC. With the help of C, Bitwise manipulation is possible. It is also suitable for graphics programming. There are lots of features provided by the C language and we will discuss these below. 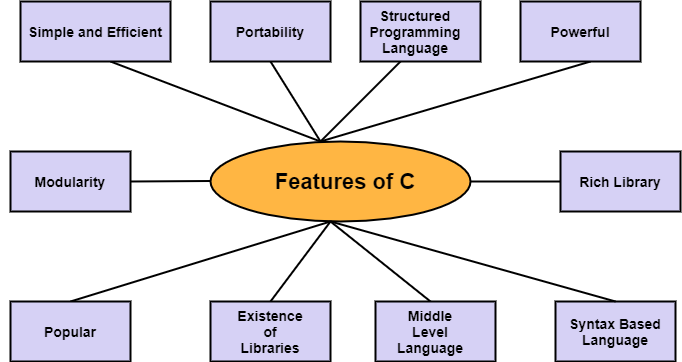 It is important to note that C is a middle-level language thus it has all the advantages of assembly language and has all the significant features of High-Level Language.

Here is a quick video to explain all the features of C language.

What are the main features of the C language?

The main features of C are it is simple and easy to learn. It has a simple set of keywords which makes it more efficient. Also, C supports various inbuilt functions that lead to Fast development.

What is the main reason behind the popularity of the C language?

The main reason behind the popularity of the C language is that it is used for the development of operating and embedded softwares. Also, C language is a great language to introduce a beginner to the programming world.

Why is C considered a Powerful Programming Language?

It is considered a powerful language because it provides a broad range of data types, functions, control statements, decision-making statements, etc.

Yes, one of the main important features provided by C is portability. And it is because the programs written in C are efficient in being written on one platform and running on another with or without any modifications.

This tutorial was all about the features of the C Programming Language. C is simple, procedural, portable language, which is suitable for both, complex and simple programming. One of the main features of C is its ability to extend itself. It is a reliable and easy-to-use languages. It is also suitable for graphics programming. C has a set of standard libraries for Input/Output, manipulation of Strings, and Arithmetic Operations, etc. which makes it even better.