A function is a block of code that performs a particular task.

There are many situations where we might need to write same line of code for more than once in a program. This may lead to unnecessary repetition of code, bugs and even becomes boring for the programmer. So, C language provides an approach in which you can declare and define a group of statements once in the form of a function and it can be called and used whenever required.

C functions can be classified into two categories,

A User-defined functions on the other hand, are those functions which are defined by the user at the time of writing program. These functions are made for code reusability and for saving time and space.

General syntax for function declaration is,

When a function is declared to perform some sort of calculation or any operation and is expected to provide with some result at the end, in such cases, a return statement is added at the end of function body. Return type specifies the type of value(int, float, char, double) that function is expected to return to the program which called the function.

Note: In case your function doesn't return any value, the return type would be void.

Time for an Example

Let's write a simple program with a main() function, and a user defined function to multiply two numbers, which will be called from the main() function.

Just like in the example above, the general syntax of function definition is,

The first line returntype functionName(type1 parameter1, type2 parameter2,...) is known as function header and the statement(s) within curly braces is called function body.

The function body contains the declarations and the statements(algorithm) necessary for performing the required task. The body is enclosed within curly braces { ... } and consists of three parts.

When a function is called, control of the program gets transferred to the function.

In the example above, the statement multiply(i, j); inside the main() function is function call.

Passing Arguments to a function

It is possible to have a function with parameters but no return type. It is not necessary, that if a function accepts parameter(s), it must return a result too. 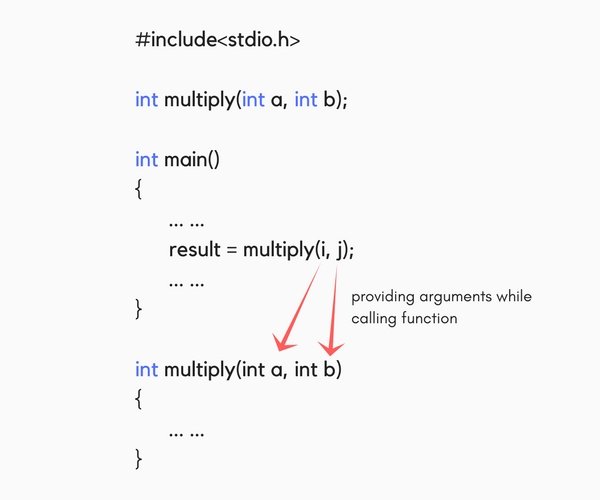 Returning a value from function 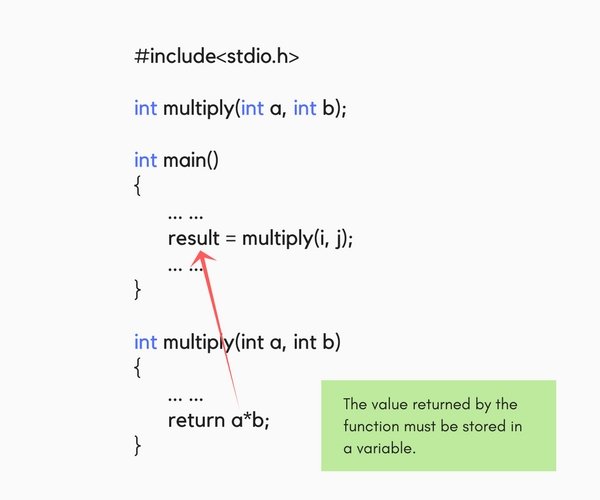 The datatype of the value returned using the return statement should be same as the return type mentioned at function declaration and definition. If any of it mismatches, you will get compilation error.

In the next tutorial, we will learn about the different types of user defined functions in C language and the concept of Nesting of functions which is used in recursion.