Can two people speak at the same time and still understand each other's statements? Well, not. The same goes for data-frames in a computer network. If we transmit two frames at a time, they'll collide with each other, and data will get lost.

The difference is, only that station can transmit the data which is approved by all other stations in that network. And we saw that in random access protocols the transmission is based on the availability of the transmission channel.

So, here in controlled access protocols only one station can transmit the data-frames at a time, which leads us to a collision-free transmission through the communication channel.

Let's learn about them one by one.

Whenever we travel from a train or an airplane, the first thing we do is to reserve our seats, similarly here a station must make a reservation first before transmitting any data-frames.

This reservation timeline consists of two kinds of periods:

Consider there are 4 stations then the reservation intervals are divided into 4 slots so that each station has a slot. Means if n number of stations are there then n slot will be allotted.

Now let us assume that these 4 stations are 4 friends, now is friend-1 speaks in his slot-1 then no other friend can speak at this time. Similarly, if station-1 transmits a 1-bit data-frame in slot-1 then at that time no other station can transmit its data-frames and they must wait for their time slot. After all the slots have transmitted and checked then each station knows which station now wishes for transmission.

The biggest advantage of this method is since all stations agree on which station is next to transmit then there are no possible collisions.

Recall your school or college classroom, what was the first thing the teacher does after entering the class? The answer is roll call or attendance. Let's compare the scenario. The teacher calls roll number 1 and gets a response if he/she is present then switches to the next roll number, say roll number two and roll number 2 is absent, so the teacher gets no response in return or say a negative response. Similarly, in a computer network there is a primary station or controller (teacher) and all other stations are secondary (students), the primary station sends a message to each station. The message which is sent by the primary station consists of the address of the station which is selected for granting access.

The point to remember is that all the nodes receive the message but the addressed one responds and sends data in return, but if the station has no data to transmit then it sends a message called Poll Reject or NAK (negative acknowledgment).

But this method has some drawbacks like the high overhead of the polling messages and high dependence on the reliability of the primary station.

We calculate the efficiency of this method in terms of time for polling & time required for transmission of data. 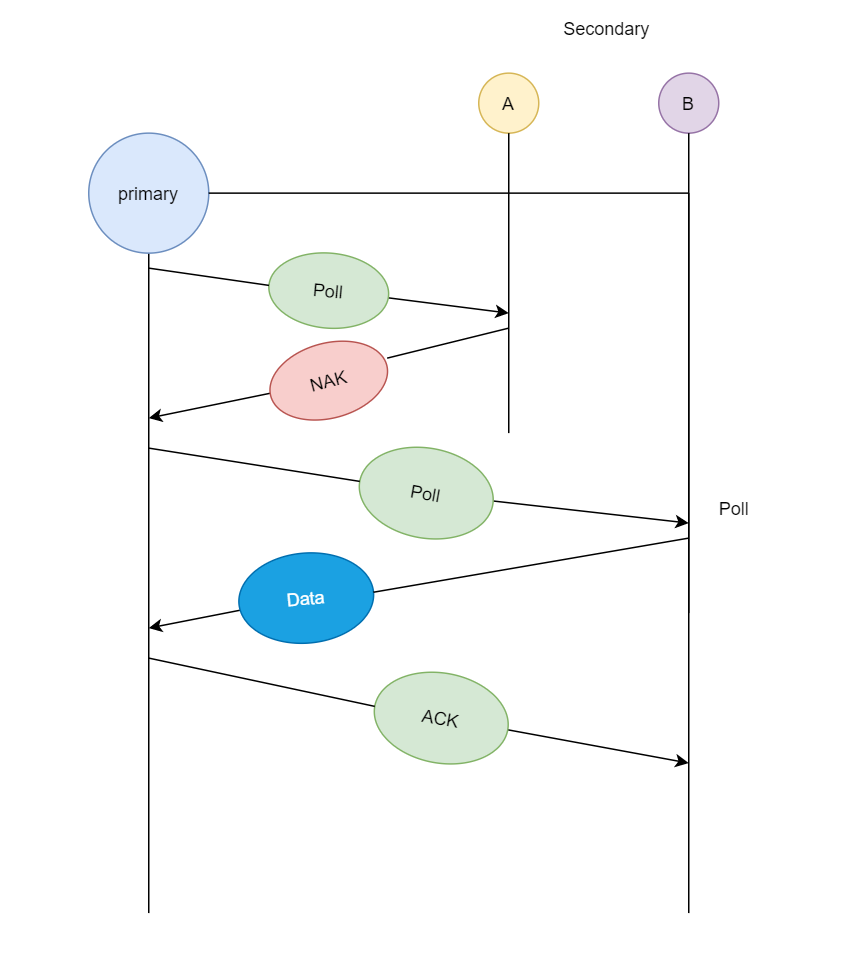 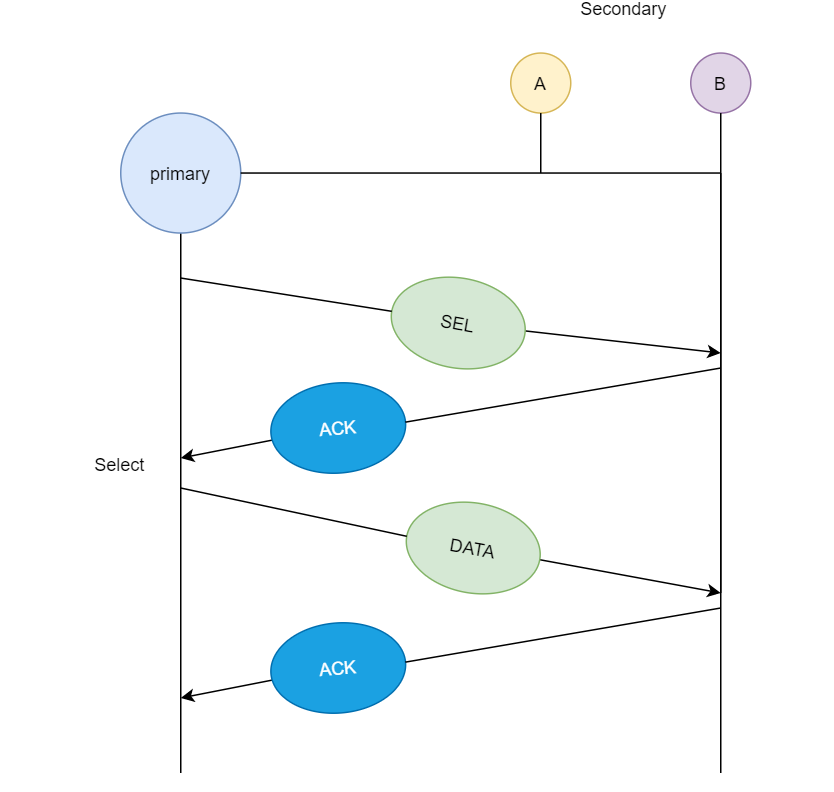 Now, say 4 people are sitting on a round table and only that person can speak who has the token. In computer networks a token is a special bit pattern that allows the token possessing system to send data or we can say that a token represents permission to transmit data. The token circulation around the table (or a network ring) is in a predefined order. A station can only pass the token to its adjacent station and not to any other station in the network. If a station has some data queued for transmission it can not transmit the data until it receives the token and makes sure it has transmitted all the data before passing on the received token.

This method has some drawbacks like duplication of token or sometimes the token is damaged or lost during the circulation, or some times if we introduce a new station or remove an existing station from the network, this leads to a huge disturbance, which should be taken care of so that the efficiency of the method is not affected.

The performance of a token ring is governed by 2 parameters, which are delay and throughput.

Delay is a measure of the time; it is the time difference between a packet ready for transmission and when it is transmitted. Hence, the average time required to send a token to the next station is a/N.

Throughput is a measure of the successful traffic in the communication channel.

In the diagram below when station-1 posses the token it starts transmitting all the data-frames which are in it's queue. now after transmission, station-1 passes the token to station-2 and so on. Station-1 can now transmit data again, only when all the stations in the network have transmitted their data and passed the token. 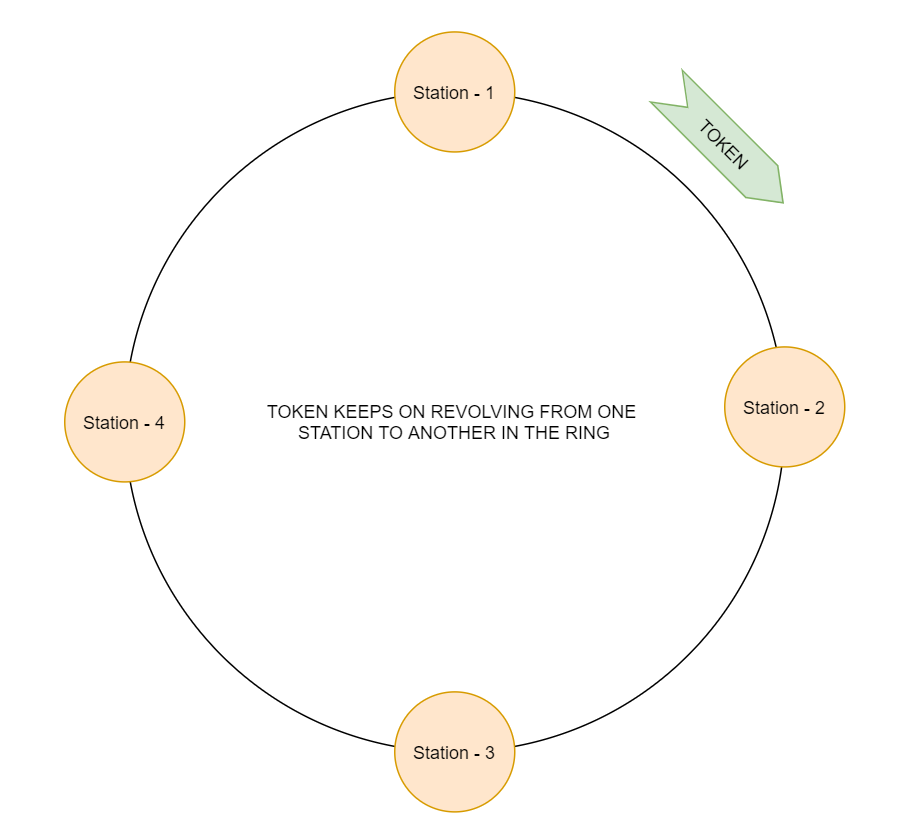 Note: A token can only work in that channel, for which it is generated and not for any other.

In this tutorial we covered the controlled access protocols, namely, Reserved, Polling and Token Passing.