While loop is used to execute a block or segment of code repeatedly until the condition becomes false.

Syntax of While loop:

Consider the below example that prints "Hello, World" 5 times. 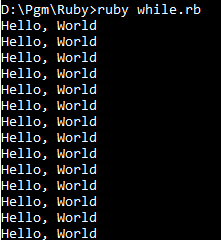 Oh, Wait! What's this? It should have printed "Hello, World" only 5 times. But what happened?

The variable count is initialized with the value 1 and the loop will terminate when count becomes 5. But inside the while loop, there is no statement that increments the value of count. Since the condition never becomes false it won't terminate. This is called Infinite loop. 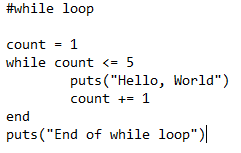 Well, that's our expected output. After the condition fails, it comes out of while block and executes the next statement followed by while block.

The next program prints the sum of first ten numbers.

Until loop is very similar to while loop.

Syntax of While loop:

The condition is checked, if it false it executes the statements inside until block, when the condition becomes true, it comes out of the loop.

Program to print the sum of first 10 numbers

The output of the above program is :

It pulls out each element of a container or an array and assigns to the variable x. Using the value of the variable x, we can do our desired operation.

Ruby: For in loop

It's just like while and unless loop to execute set of statements repeatedly. Using this we can also iterate through containers.

In this code, it pulls out each element of the array nums and storing it in a single element(variable) num. Then using that value, we can do the required operation. The output of the above code is :

To sum 10 numbers using for in loop:

And its output is :