In this tutorial we will learn about chaining assignments, defined operator and parallel assignments.

Very Commonly, in a program you want to initialize a set of variables with a same value, typically 0.

But, there is another way called chaining assignments used by programmers.

Now all the three variables have the same value.

You can see that the variables a, b & c has the same value 0.

This is an interesting feature of ruby. Using this in an expression we can determine what type of identifier it is. We have defined the variable a. We can now use defined operator to identify what is a?

Since variable a is declared locally it returned as local-variable. Likewise, it returned method for printf and assignment for the expression a = 1.

It is done by, 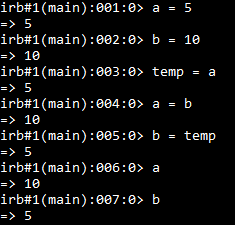 But there is an efficient way to do this called parallel assignment. This can be done by a, b = b, a . Quiet simple. Right? 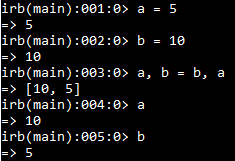